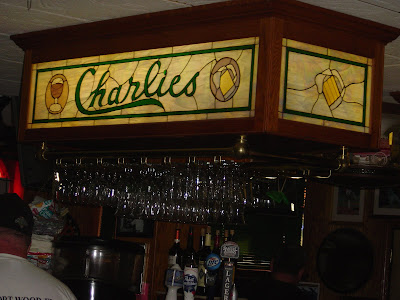 Just reminiscing about a great bar in Somers Point, NJ--Charlie's Bar. This is a family-friendly bar with great food, so I've been going there since I was young. This place has the best wings around, hands down.

During my college summers, I worked down on the Jersey Shore and I lived with my grandmother in Somers Point. I'd probably hit Charlie's at least once a week and sometimes many more. After golfing, for a night out, when my brothers and sisters visited, any excuse to get me some of those wings.

In addition to dozens of large screen TV's to catch all the Phillies games, Charlie's also has a pool table and shuffleboard and darts, although you better go at off-times to enjoy those--the place gets packed and it's hard to play then.

Once I went there with one of my friends after golfing when I was 20.5 years old. Of course, I still put down a couple. My grandmother asked me if I was drinking beer, and when I told her yes, well I got a lecture about my age.

On a better memory front, my coworkers used to ask me on the night shift if I'd like to get breakfast with them the next morning. Finally I said yes one morning. To my surprise, "breakfast" was code for a few drafts at Charlie's. The place opens at 7 am, so except for the super old whiskey dude on the end stool, we were usually the first ones in. A few beers, a few games of pool and then home. But no breakfast (at least no food).

I went with my brother and sister last August after a long time away (I live in Florida now). Same great wings and cold draft choices.

Next time you're in South Jersey, skip the vegetable stands and head straight for Charlie's.

One more thing... Cash only. But they conveniently have a cash machine if you forget.

Update 8/14/2010: I was at Charlie's two times in the past week. All of the pictures are from these visits. Same old place, same kick-ass wings, same cash only, same Phillies always winning. Beer taps seem the same too with nothing notable. What's new? Well, first of all, the cash machine was not working. According to my brother, that's two times in a row. There is no pool table or darts anymore--they were sacrificed for a handful of tables. The hostess station is now right at the entrance, encroaching on the defunct phone booth--big improvement from the hostess being in the servers' path from the kitchen, which it always had been. 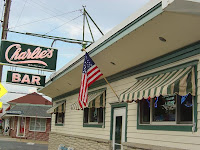 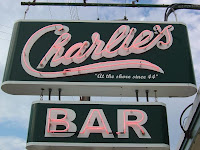