As I promised yesterday, you're in for a treat today. When I was drunk a few days ago, I asked Cooking Asshole from the Cooking for Assholes blog if he'd like to do a guest post here. And moments later, he accepted. I don't really know anything about this guy except that he can cook, he used to work for a brewery, he likes beer, and he can curse like a sailor. Oh yeah, and his blog is hilarious. Go read it after you read this guest review! 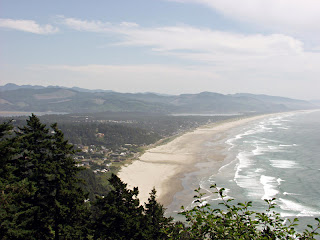 Portland, Oregon has more breweries and brewpubs per capita than any other city in the United States but some of our most prized reside two hours outside the city on the dramatic Oregon Coast. Pelican is one of them. The hiss of the cap releases an aroma that you would swear smells like salt water. It conjures up all your memories of beach trips gone awry in an intoxicated haze: Bonfires on the beach before noon and beer to go with it, waking up to a trashed rental house and the sweet relief of knowing you will be there another few days, garage sales at Rogue brewery where you brought four cars and filled up every trunk (and one was a mini van), camping at Sand Lake estuary and the fifth member of the party being a handle of Maker's Mark, buying live dungeness crab off a boat in Depot Bay and then having crab fights and betting on them. Ah, the memories.

This is what Oregon Coast beer means to me. To you it means nothing. Your memories suck and your life is boring as shit. You sit at home on the weekend with your cats, your cat blog, and you chat with other losers online about cats. You make me sick. 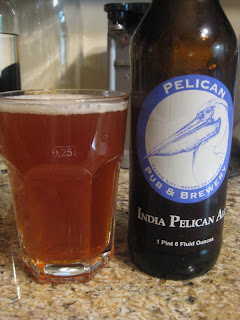 In any case Pelican brewing is the fucking bomb and this IPA is no exception. It is incredibly bitter but palatable (unlike Dick's Brewing IPA), and has an wonderful orange glow and citrus flavor. I fucking love it. But then again, it means so much more to me. Drink it.
Posted by Beer Drinker Rob at 5:13 PM

Ask him about his hippie days.