Here is a guest review by Cynthia Wunsch, The Unlikely Entrepreneur. After reading her posting and beer review, it's pretty obvious to me why I am so awesome! Maybe you will agree. First, I have musical talent, and although at the time I hated playing trumpet for 6 years of my adolescent life, looking back it was a great experience. I wish I still played, actually. Secondly, I'm a Penn State college football fan--none of these minor league Big 12 teams. And finally, Cynthia picked one of my all-time favorite beers to go along with her encounter. Read on and then head over to her site... Oh yeah, and also keep your eyes open for one of my posts on her site. Something about sneaking beer into an opera or some other crazy stuff like that. Go ahead, I'll shut up now, Cynthia...


Last Saturday night was the Texas-OU game, one which often engenders bitter rivalries, as I found out. I was sitting in a fast-food restaurant with a friend, trying to catch up, when a very drunk Texas fan in his late 20s or early 30s, accompanied by his sister, approached a group of four OU supporters in their late teens or early 20s. Although Texas had won (I think), somehow this fan didn't feel the game was over, and accosted these inoffensive kids, who had been talking quietly amongst themselves and minding their own business. The Texas fan repeatedly called the Sooners "d---------s" and was loud and belligerent. The OU fans were polite, and tried to placate him but he repeated his profanities several more times. Despite the best efforts of everyone in the restaurant (except his sister, who egged him on), he would not be quieted. Eventually he left, and we all breathed a sigh of relief, and several of us apologized to the Oklahoma fans.

Unfortunately, it didn't end there--the Texas fan drove away, then changed his mind, and drove back through the parking lot, got out of his car, and hurled a drink at the glass window next to the Oklahoma guys. Finally, one went out and threw his drink at the Texas fan, who in trying to get away had slipped and fallen on the ground on the way back to his car. I was already digging for my cell phone to call the police. Then the OU fans packed up and got out of there, as we wished them a safe journey home. A good thing, too, because the Texas fan had still not had enough and came back; fortunately by that time there was no-one left to take his anger out on.

It occurred to me that that Texas fan was probably listening to the wrong kind of music, since it's been shown definitively that Mozart reduces stress levels. But for sure he was drinking the wrong kind of beer, and with that I come to my review of Young's Double Chocolate Stout. My local store sells it both in bottles and cans--the cans have the typical stout widget. The beer is produced in Bedford, England. 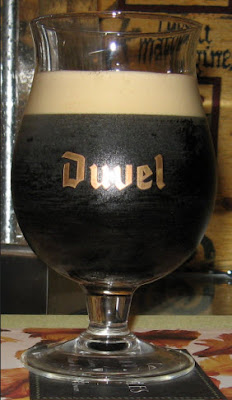 I didn't have a Young's glass, so after some deliberation, I chose a Duvel glass.

The stout pours beautifully, and with a little encouragement can produce a half-inch-thick head of fair body and holding power. The colour is dark and opaque, and the bouquet is wheaty and yeasty, lots of roasted notes, with hints of very dark chocolate (over 90%), and a faint aroma of coffee. The thing that you notice first is the velvety texture of the beer--there's absolutely no "kick" of alcohol--just a smooth, velvety sensation on the tongue and down the throat. Young's is not a weighty, thick beer, like the Irish stouts, but substantial. Just a hint of bitterness for bite, but everything about this beer is beautifully balanced. There are no off notes or bitter tastes; this is a finely-crafted beer. The chocolate flavouring is subtle, not sweet, and comes through better after several sips. The foam clings to the glass for a long time, and like Guinness, you can draw your initials in it, although they don't have the same staying power.

The carbonation is extremely fine, almost like a Czech Pilsener. And the finish? The beer melts away to a silky coffee aftertaste. A luxury beer to be sure (the can explicitly says so), but penny-wise, pound-foolish, right?
Posted by Beer Drinker Rob at 12:41 PM

Great review--makes me want to go buy one right now!

Yes, bunny. She made it sound delicious. Nothing wrong with a morning drink, either.

In the meantime, stick to Chocolate Milk.

This beer sucks shit. This is one of the worst imports available. I find it laughable that you poured it into a Belgian glass. I find it highly laughable that this is the beer you decided to highlight. Ridiculous.

On the contrary, this beer is delicious. I prefer it from the bottle though.

Here's one from the UK that will make you reconsider. http://www.dailybeerreview.com/2009/03/black-sheep-ale.html