Yesterday I promised a more complete story on my acquisition of some Lazy Magnolia beers. Back in April, I was chatting with a few members of the Aleuminati, which is this super secret society of beer dudes, not. I asked one of the employees of Lazy Magnolia Brewing how I'd be able to get their beers here in South Florida without driving to Mississippi. He told me soon they'd have something in place. End of story, for a while.

Out of nowhere, six months later, this guy contacted me to let me know that their beers are now available in South Florida. It was totally cool that this guy would remember a short exchange we had that long ago. However, when he told me that I'd have to drive to Naples (and I live in Miami), well, that kind of killed the mood. However, let's just say that he went out of his way to facilitate an easier way for me to get their beers.

Lazy Magnolia currently has five beers. They bottle three of them, which I am now the proud owner of (or was before I drank them). But guess what, brewery dude also made sure that I got one of their beers that they don't currently bottle. Apparently there are a few they bottled in a practice bottling run. How cool is that? It even looks like they are still working on label design. I'm talking about Jefferson Stout, a beer brewed with sweet potatoes and lactose. To me, that sounds extremely strange, but that is why I am so looking forward to this sampling. Just to check, I went over to the Beer Advocate page, and yep, you guessed it. ZERO bottle reviews and no picture of the bottle. I have an extremely limited edition.

The aroma is very inviting with sweet chocolate and malts to start. Flavors start out with lots of coffee and a nice earthy sweetness coming from the sweet potato. You will also taste chocolate and burnt flavors. Jefferson Stout is not overly sweet but rather balanced nicely by some hops. It is creamy and silky smooth. Medium body and not a thick stout, but really delicious. Also, I have no idea how much alcohol is in this beer, but you will not get a kick from it. The finish is a little dryer and lingers. Unique and really an all-around great beer that I'll have often once Lazy Magnolia gets unlazy and starts bottling this stuff for good! Get a keg if you live near Kiln, Mississippi.

The Constitution of the United States of America, with the Bill of Rights and all of the Amendments; The Declaration of Independence; and the Articles of Confederation 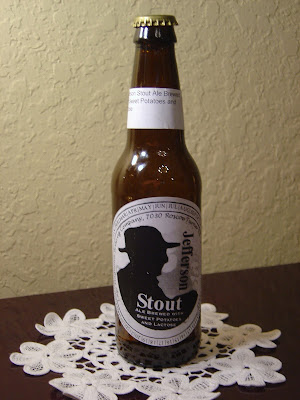 I have been getting this as a growler fill here in Nashville and I love it. I had no idea it used sweet potatoes----no wonder I love this beer; I can eat sweet potatoes every day!

We still don't get that beer in Miami, so I haven't had it since this review. I agree, sweet potatoes give it a nice flavor.