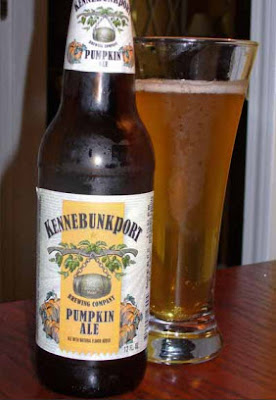 Bunny at bunnygoround and your humble Beer Drinker go way back, all the way back to the beginning of October this year. It was just after I made this culinary masterpiece that Bunny jumped in and assaulted me for not using pecans. This chick has so much time on her hands that she prepared a cook-off rebuttal for the Cooking Asshole to publish. Since then, we've made up, and I learned that Bunny also has a drinking, um, interest. Without further ado, here is her post...


A “downsized” economic statistic, I don’t have much more to do with my days than drink beer, tend my hemp patch and go to strip clubs. Ok, I don’t have a hemp patch. But I am a lover of good craft beers, and a damn fine writer, too, so if you need a freelance editor/proofer/writer, ask Beer Drinker to put you in touch. My rates are lower than a grandma’s bra-less boobs. Now, on to the review.

I was in Trader Joe’s recently and, on a whim, picked up a six-pack of Kennebunkport Pumpkin Ale from Kennebunkport Brewing Company. Had never heard of the company or the beer, but I have been jonesing for a good pumpkin ale with the onset of fall. Now for the back story.

I first had pumpkin ale two years ago on vacation in Wilmington, NC. I remember the meal well….an awesome burger and sweet potato fries. And that beer. Cottonwood Pumpkin Spiced Ale by Carolina Beer Company. Like drinking a pie. If loving that beer was wrong, I didn’t want to be right. The next two days, we drove to every Kroger in Wilmington to find it and, by God, I can home with three 6-packs.

I don’t know that I’ve had a pumpkin ale since then, and any contender had a lot to live up to. So, I picked up the Kennebunkport with somewhat high expectations. Dudes, not only were they dashed, they went up in flames.

I opened the bottle expecting my olfactory senses to be overwhelmed with the smell of pumpkin spicy goodness. Nothing. I took a deep sniff. Ok, maybe a wee bit of cinnamon? Molasses? I poured it into a glass—the color is pale amber, which may be the closest thing to pumpkin about this beer. It has an ok head, which disappears quickly—a plus for me because I am not a big fan of lots of carbonation.

Then, the taste. Whiskey. Tango. Foxtrot. Where’s the pumpkin? For some strange reason, the longer I drank, the more “pumpkin” I could taste, but this beer is weirdly bitter, with a weak pumpkin aftertaste at best. If I didn’t know better, I would have guessed I was drinking a domestic after eating a piece of pumpkin pie. Two hours ago.

Very disappointing for my first pumpkin ale after Cottonwood. I don’t know what kinda moose crack they’re smoking up there in Maine, but this beer sorta blows. I don’t think I can even finish the six-pack.

In an interesting footnote, the brewing company does not have a website, but I did find the following on the Internet: “Kennebunkport Brewing Company is also known as Federal Jack's. Along with Shipyard and Sea Dog, they are all under the same parent company. I wouldn't be surprised if these beers and Sea Dog’s are exactly the same.” Hmm. Let’s hope this beer is one they chose not to repackage. 2 out of 5.
Posted by Beer Drinker Rob at 1:28 PM

Dude...isn't that a lager glass? What the hell are you doing pouring an ale into it?

Dude, yourself. Unless you're referring to Bunny as dude. Then go right ahead.

She did this review.

Look at Mr. Fancy Pants with glasses for ale and glasses for lager. Dude, I usually drink straight from the bottle, but I poured this one up for the pic. So sorry it's the wrong glass, Martha.