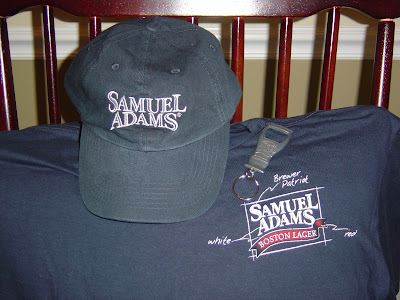 Several weeks ago I mentioned in passing a complaint I lodged with The Boston Beer Company. Within a one week span, three of their bottle rims broke off while I was opening them. I can hear you already, "were you being too aggressive?" and "do you know how to use a bottle opener correctly?" Hello!?! I am an expert at opening beer bottles; hell, I'd even go as far to say that I am an expert at opening Samuel Adams Boston Lager bottles, the bottle breaking perps.

Well, last night, my son brought in an envelope the mail man brought from the Sam Adams guys. This must be related to that complaint, no other way. Inside, a t-shirt, a baseball cap and a cool bottle opener, each suggesting to "Take pride in your beer." That is the way to do customer service! They could have sent me some bullshit apology letter and even some kind of coupon or voucher for their beer. 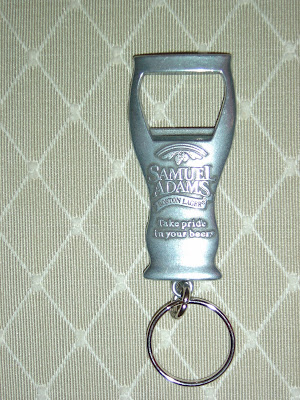 Instead, I got a bunch of stuff, and I'm guessing they somehow know I will be a walking billboard for them. And this ad campaign cost them less than $15 or so. Little did they know that I'd also be writing about it to you guys (all four of you, thanks mom). Anyway, nice job! I made sure the first beer the new bottle opener touched was a bottle of Sam Adams, too. Karma.

So I'll be the guy in the Sam Adams hat, unless there is some unforeseen falling out. Funny, that's what my boss does. He loves this one well-known internet company. Rhymes with bamazon. When they do something he doesn't like, he wont wear his favorite hat for a while, I guess in protest.

Today I'm drinking Holy Sheet Über Abbey Ale brewed by Clipper City Brewing Company in Baltimore, Maryland. This is one of their Heavy Seas beers. I must admit that looking at the date on the bottle, this beer has been aged. It says to purchase before January, 2009. I am quite sure I purchased it after that date and that I've had it for at least four months, so the retailer is also to blame. I am, however, a skeptic for believing that short-term beer expiration dates mean anything (the same as I am for drugs; the acetaminophen in the medicine cabinet expired 3 years ago). Isn't this style supposed to age well anyway? Anyone?

The aroma is inviting with lots of dark fruits, mainly raisins and prunes, along with caramel. Flavors follow the aroma. Lots of caramel with awesome dark fruit, raisins and a hint of chocolate. The initial alcohol flavors really enhance the dark fruits nicely. There are also some spicy black pepper elements in the background. Medium to upper-level body with a decent yet maybe slightly low carbonation. That initial alcohol assessment turns ugly by the end, as the booziness becomes much less welcome and overwhelms those great dark fruit flavors. It starts to be harsh and hot on the palate; rum + sweet + spice = Captain Morgan. If that alcohol was toned down a bit or blended for the entire experience, this would be a terrific beer. As it stands, Holy Shit! Was good, not great.

I wouldn't worry about the date on that one but I also would not intentionally age it. I was at a Christmas Dinner Party and they handed me a Deschutes Black Butte Porter. On the label it said drink by some date in 2005...still tasted fine...a little skunky but it definitely had drinkability.

In any case, I am totally going to start writing fake complaint letters to all my favorite breweries so I can get some free shit!

In the early 90's before the internet and mass information, we used to write the breweries hoping they'd send beer, not really knowing they couldn't legally do it.

We used to get bumper stickers and crap like that. But this was a legit complaint. Resolved!