I've got nothing to say except I need a little liquor to go with my beer this Christmas season, and that's gonna require a Total Wine expedition. I'm thinking that I'll leave my three year old home as we've been identified as regulars, and he as a "loyal customer starting on his 21st birthday." All I could say was, "I hope not" but that was just a reflex.

Anyway, I'll probably get some Grand Marnier, Absolut, Gentleman Jack, and a few others, if I find the price is right. And of course some beers, hopefully a couple of new stars.

Right now I'm drinking Mendocino Imperial IPA brewed by Mendocino Brewing Company in Saratoga Springs, New York. This winter seasonal is a "Limited Edition" and an "award winning brew" according to the label.

The aroma is hoppy with light citrus, followed by some sweet malts as well. Sweet caramel starts out the flavor profile, but just for an instant. Bitter grapefruit and some lemon and orange citrus whip their way in and attack that sweetness, leaving a nice bitterness that lasts the rest of the way. Decent bite, although not nearly the killer that I was expecting from this Imperial IPA. Some spicy black pepper and a nudge from the 7.5% alcohol make their way into the mix by the end of your experience. Good, just slightly less hoppy and bitey than I believe I was lead to expect. I mean, Hondas are great cars, but when you're expecting to be driving a BMW, it's a bit of a letdown. Rename this beer and people will flock to it as a tasty choice. 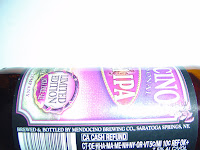 OK people, if you're reading the comments, here is the bottle that says Saratoga Springs, NY. I know the picture is small and not that great, but deal with it. Click it and you can read it. These guys have two (or perhaps more) breweries. Mine is a NY beer!
Posted by Beer Drinker Rob at 5:10 PM

try throwing some Old Parr scotch in that shopping list; they recently started selling it in sofla after only being available at the airport duty free. It's very, very popular in latam and I highly recommend it. Many, including myself, conclude its the best 12 yr blend.

This brew is actually out of Mendocino, CA (or rather Hopland, CA) not New York. :)

One of my favorite labels. You should go check out the old school brewpub.

Thanks for stopping by and the suggestion to check out the brewpub. If I get to California...

I actually wrote a reply to your comment last night and published it. But then I deleted it because of a misspelling and because I wanted to make sure my smart-ass-ness was correct.

So I went to the garage and dug through day old chicken bones and an army of pissed off ants to find the bottle this beer came in.

Sure enough, it says, and I quote, "BREWED & BOTTLED BY MENDOCINO BREWING CO., SARATOGA SPRINGS, NY."

BFF Google quickly showed me that this brewery has two locations. http://www.mendobrew.com/company/. However, I'm going to have to go with the label for the specifics of the one I drank.

I will take a picture of that label and publish it here tonight some time.