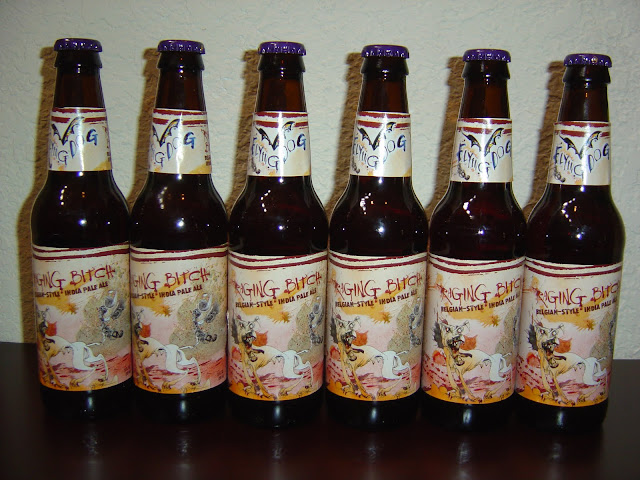 Tonight I'm drinking Raging Bitch, a Belgian-Style India Pale Ale brewed by Flying Dog Brewery in Frederick, Maryland. This beer showed up at BFF Total Wine's house about a week or so ago, so I grabbed one right away. This beer is celebrating the brewery's 20th anniversary. Congratulations! You have become one of my favorite breweries out there! The label has some kind of alien dog that looks as if it could go for a sandwich or two--could be why she is raging. The label goes on to describe this beer, starting with "Two inflammatory words... one wild drink."

I first heard about this beer a few months ago, and I guess because the name sort of sticks out, I immediately searched my blog for the "raging bitch" phrase as it sounded so familiar. I thought that I might have called someone, perhaps even my wife, a raging bitch. To my relief, I didn't say that (at least not in print), but I did refer to a hurricane as raging and as a bitch in one post.

Now that's not to say I haven't crossed paths with several raging bitches, and I don't mean dogs either, but I'll refrain from naming them here. As much as I don't like it, I did use the "C" word one time instead of bitch, but that is still in a draft. I have been unable to publish that story because there are zero synonyms that sum her up quite like that word. So I'm still sitting on it!

As for this Raging Bitch. Wow! Really wonderful, everything! I guess you can skip the rest since I gave it away! The aroma-magnificent hops and grapefruit and pine. The flavors are fruity, not overly bitter, just the perfect amount of grapefruit bite blended with orange and other citrus flavors. There is a light spiciness and some bready flavors, too. Creamy, awesome carbonation. This beer is so refreshing and crisp and smooth, I'm in love! The 8.3% alcohol is nowhere to be found, not good or bad, just an observation. You will finish with a lingering light bitterness on your palate before you wished you had a second bottle. Gonzo Imperial Porter was my favorite until about 10 minutes ago, but now it's a toss up. The one thing wrong with this beer? The name--this is no raging bitch--it is a super-well-balanced awesome beer, not some out of control bitter freak unbalanced alcoholic mess! Jeez! Hey Flying Dog, I'm available if you'd like beer with name pairing assistance. 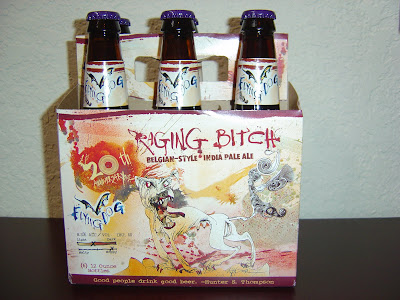 These Belgian IPAs are becoming all the rage. I have not had this one but Allagash - Hugh Malone Ale has been my favorite so far.

Yeah, if you find this one for sure check it out. Was great. I get a couple of Allagash here, but I just added Hugh Malone to my "wish list" which is basically whatever I can get the traveling friends and coworkers to bring home.

What is the rage all about? Like a hula hoop? Does the "Belgian" yeasty part imply the IPA bitterness will be toned down a bit? You tasted Hop Stoopid or Ruination? Those are bitter big-ass IPA's.