I guess as usual I'm going to talk about a bunch of crap today. Nothing will probably go together, so bear with me!

First, Kiefer Sutherland never accepted or declined my invitation to watch the 24 season premier tonight. Don't you hate it when people don't let you know their plans?

Second, this morning from 12-12:30 I could have either watched Jimmy Johnson hawking his "sophisticated investor" seminar series on NBC OR watched Jimmy Johnson hawking his NFL-ish analyst type bullshit over on FOX. Yep, they were on at the same time. Big props to the infomercial dudes as that was much more persuasive and interesting. If I weren't such a genius, I might have signed up!

Next, let me tell you how awesome Texas de Brazil was last night. I didn't feel like I was at the mall at all. Super-awesome buffet--I had so much shrimp and sushi rolls, I probably ate the price tag for the whole night there. But at $45 a head, it was expensive. But these (non-Texas-non-Brazilian) waiters and meat servers (or whatever you call them) gave us some awesome service and kick-ass cuts of meat for a long time!

Now let me set the tone for you. Saturday night. Dolphin Mall in Miami. Is that enough? Yes, I had to be bumped in line by the types of people that just can't keep their conversation to speaking. Yes, I got raped for a $4.50 bottle of water (when I bought a 24-pack case for $3.99 just the day before). Yes, I couldn't understand the muffled "movie-sold-out" announcements over the loud speaker, but that was because they were in a foreign language. I was surprised there were no snakes or iguanas as pets with these people, but I guess the Miami PD discourages that.

Finally (not including my beer review below), you guys will probably mistake this for a professional movie review. I assure you that I am not in the industry (although I'm waiting for the call). Warning: if you didn't see Avatar in 3-D, I'm probably going to unwittingly give some of it away. One other piece of advice. If a 9 PM movie is sold out and you bought a ticket, don't complain if you and your girlfriend and her 4 children can't sit together if you all arrive at 9:05!

I loved the creativity of all the Pandora characters. The 3-D effect was terrific and not like the cheesy old-school baseball coming at my head (or IMAX Discovery Museum educational dinosaur trying to bite me). The colors and diversity of "animals" showed tremendous imagination. I preferred the vicious and ferocious Pandora animals with their teeth and ferocity. Some of you wimpier readers will probably like the Tree of Life type floater types.

The "sky people" weapons were awesome, including the giant soldier guys complete with virtual action and machine guns. Kick ass, mostly! I was tense and on the edge of my seat a bunch of times! I appreciate that the love story was kept to a minimum. The boobs shown would not really ever even make Mr. Skin's listings, which I guess was OK for this movie. The major downfall was that at 2:40 + 20 minutes of previews, it was too long. There were easily 25 minutes that could have been cut with zero plot missed. I try to avoid beer grades in my reviews, but considering I never see movies, I'll give one for this movie: Avatar in 3-D gets a B+.

Today I'm also drinking 2° Below Ale brewed by New Belgium Brewing in Fort Collins, Colorado. This came home with a friend from San Antonio. The label says serve at 37 degrees. Best Before 07May10.

Fruity with some malty caramel for an aroma. The flavors start out fruity with pears and citrus, very lightly sweet. But in an instant that sweetness is swept away by quite a hoppy hurricane. The beer becomes very bitter and sour. Some spices along with toasted and bready flavors are also in the background. There is a weird metallic and medicinal flavor along with a dose of the 6.6% alcohol that shows itself in as the beer progresses. Medium body and carbonation, dry finish, strange bitter aftertaste. Not horrible, not wonderful. Definitely drinkable although I'd opt for something else.

Avatar: A Confidential Report on the Biological and Social History of Pandora (James Cameron's Avatar) 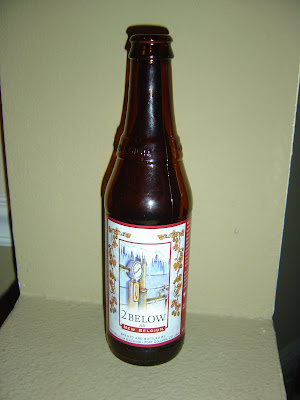