I started writing about something else when outside of my home office window I heard some commotion. No, this isn't a Santa visiting story! What to my wondering eyes should appear? Thirteen Miramar police cars! One oddly positioned car with a woman inside looked slightly damaged, but I didn't hear an accident or see another car smashed. OK. Fire truck and ambulance arrive. The other accident car was one of the Miramar police cars, and I could see a few broken pieces of it underneath. I knew because they examined the cop and put her on a stretcher. Women drivers, right?

Helicopter arrived. So if you see me waving, it was to you. Then, unexpectedly, the fire truck and ambulance returned for the non-cop driver. Strange because she was walking around for an hour or more. And they put her on the yellow board and strapped her down, too.

My mother-in-law and I watched the (non) action from my second-floor window. She told me that crazy mountain accidents happen in her home Colombia and neighboring Peru all the time and just today a bunch of cars went off a cliff and many people died. But no police, no ambulance and it's not even a rare occurrence. Different life there!

This afternoon I'm drinking #9 brewed by Magic Hat Brewing Company in South Burlington, Vermont. The bottle calls this a "not quite Pale Ale". Inside the cap it says, "it's Good to be Queen". OK. I've heard the name of this beer tossed around for a while, sometimes in the favorite category, so when I saw it at Total Wine last week, I grabbed for it. I really had zero idea what to expect, other than a passing comment that it's a fruity beer. I'm supposed to drink this by March, 2010.

Very fruity aroma, apricots and peaches, interesting. Sweet fruity apricot in the beginning, middle and end. You will not ever forget this is the main flavor of this beer! I promise. It will be etched in your palate forever! There is a tea and herbal type of flavor as well. Reminds me of drinking the garden, if you can use your huge creative imagination. Dries out your mouth. I will say it's creamy and crisp; refreshing to the point you can tolerate the apricots. Low to medium body. Medium to high carbonation. THIS is a girly beer, and I know a few people who'd love it! Too much apricot, although by the end of big 22, it does kind've grow on you a little. I'll pass next time. 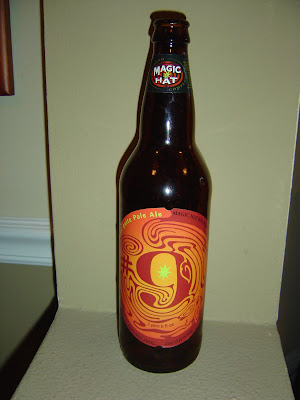 Fruity, check. Girly, check. Sounds like I'll be looking for a bottle of this for myself when I go see your girlfriend this weekend.

Hey VanaBanana. YOU are one of the people I had in mind for this.