I was reading my seven year old son a Dr. Seuss book last night. "Dog up on house. Cat down by tree." Or whatever the hell the story of Hop on Pop says. The funny part was that my son was arguing that it needs to be "a" house and "a" tree. I told him that Dr. Seuss is one of the most famous authors and that little boys are not allowed to tell him what he can and can't write. Then I got a little lip so I told him he can't tell Dr. Seuss that because he's dead! That ended the discussion.

Tonight I'm drinking Centennial IPA brewed by Founders Brewing Company in Grand Rapids, Michigan. "Hey, Beer Drinker. How'd you get Founders' beers in South Florida?" Thanks for asking, but that is part of my little surprise that I alluded to yesterday, and I think Friday night, tomorrow, I will give you the full details. The label, which you can see below, was put on the bottle about 10 degrees off straight by some drunk machine at the brewery, and it shows two angels holding up the beer name with hops at their feet.

The aroma has lots of grapefruit, but also has some gentler fruity orange and sweet caramel. You will taste a strong bitter right in the beginning, first sip. There are also some citrus and pine flavors in the beginning. Grassy, too. The small bitter bite is nice but it is also then balanced by sweeter orange and other fruity flavors. The 7.2% alcohol does show up and work the back end of the party, enhancing a late black pepper and spicy exit. Medium carbonation is right on. This beer gives an oily coating in the mouth, yet is still crisp and refreshing. Really quite delicious. I highly recommend trying it!

Oh, Baby, the Places You'll Go!: A book to be read in Utero

Yes, the bottle is wet from condensation. I just took it out of the fridge and I live in 83-degrees-in-January-humid Florida. No, that is not an optical illusion or a poorly taken picture--the label is THAT crooked! 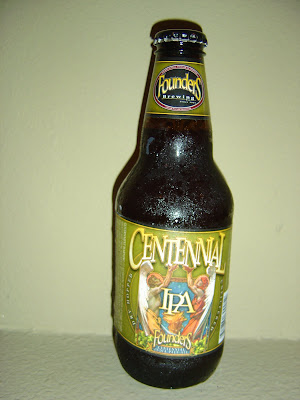 I had someone send me some of this and it just tasted off to me. I wonder if I got a bad batch or if the shipping did something to it.

For me it wasn't the most awesome IPA ever, but I did like it. It's definitely not over the top hoppy grapefruit bitter type IPA either.

Not sure what happened with yours.

Sometimes Founders can be really hit or miss. I live in GR. Had some Newaygo County Cherry there which is a specialty beer. It was probably the most disgusting swill I have ever had in my life. Kind of reminded me of Old English Scratch Cover if you were stupid enough to drink it.

Looks like my friend also sent their Harvest Ale, so look for a review of that in the next week or two. What do you think of it?

The one Founders beer I've heard a lot about it the Breakfast Stout, but I haven't had it and don't have it in my possession either.

I really like Centennial IPA. It's on tap at a local bar, so I drink it pretty regularly. It's not overly bitter and you can easily put back a few without a problem.

Thanks for stopping by. This was the first and last time I had this beer. A friend of mine in South Carolina grabbed it and sent it to me. Founders doesn't send their beer to Florida.

But it was really quite delicious!