This afternoon I'm drinking alone. Home alone AND drinking alone. Just me and Jackass on Spike. That's the one where they snort wasabi at the Japanese restaurant, purposely give each other paper cuts between their toes and on their lips, and where Johnny Knoxville gets a concussion and a mega-ass-whipping from boxing Butterbean. Funny shit!

OK. Let me get started today with Double Bastard Ale brewed by Stone Brewing Company in Escondido, California. This is supposed to be double the normal Arrogant Bastard Ale that Stone brews, so I could be in for some ass-kicking myself. I had the Oaked version around nine months ago, so I've been prepping for this day.

There is a very long diatribe on the bottle about this beer and arrogance and worthiness and well, lots of other shit. Very humble! BTW, "diatribe" is the word that Stone uses on the bottle label to describe their diatribe. Clearly, the author really had to be on top of his game when writing this. Anyway, I see "liquid arrogance" and after the 400- (or so) word speech there is a funny part that asks, "Comprehension issue?" and suggests getting a dictionary if you need help with all the big words they used in it. Worse than practicing for the SAT's 20 years ago, seriously.

This is their 2009 release, and I guess that's important as people are directed to cellar this (I guess where cellars exist) at 55 degrees or below. They've been brewing this beer since 1997 according to their website. One last thing... the bottle decorations contain Cadmium, a chemical know to the state of California to cause birth defects and other reproductive harm. Lovely, but remember, this is from California. Take that with a grain of salt and a Double Bastard!

Pine and spicy black pepper hit you in the face upon opening. You will also smell some bread and malts. Holy wow! There is a massive black pepper flavor right out of the gate, even a burn from it. Bitter with pine and grapefruit as well, but blended and not standout flavors. Rather those are all combined beautifully with malts and dark fruits. Definitely some sweetness is there to counter the initial spice and bitter--lots of caramel and alcoholic raisins and other malts, too. Thick body, medium carbonation. This beer is harsh and prickly in the mouth, yet that is not unexpected or even unwelcome, just an observation. The 10.5% alcohol in big boy 22 is not hidden, either. It is showing off but not in a shivering and overpowering way. Complex, great flavors. NOT for everyone, as the label also suggests. However, this was excellent and if you are in South Florida, feel free to bring this over. I will be most humble! 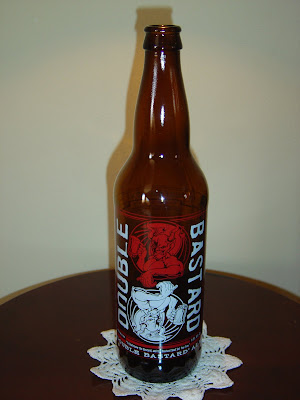 The Cooking Asshole also wanted to contribute. He snapped the picture below of a "ginormous bottle of double bastard". He said it cost $80 and came with a lock and key. I can't read the volume of the bottle. Some fancy iPhone he has. Anyone know how ginormous this is? 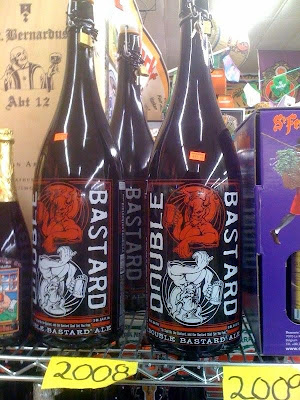 This shit? Will Kick. Your. Ass. And then knock you on it. The pub where I had it served it in a double old-fashioned type glass and that was plenty unless you are staying in for the night or have a DD.

Yeah, bunster. You said it. Add a few other beer types after the fact and my Double Bastard afternoon was the gift that keeps on giving.

If I didn't have kids, my night (minus the wife headed out for a drink) would be great.

OK gotta put these kids down. (If you know what I mean).

That is a 3 liter bottle.

Thanks a lot. I think about that in terms of the bottles of Coke in my house. That's big!