Tonight is President Obama's first State of the Union address. Before he gives the speech later, and since this speech is basically an annual summary, I am going to make a bold prediction based on what I've seen in one year. The President's predictions will likely vary from mine slightly.

So if you're not sitting down and holding on to something tightly, now's your chance. Here you go... Hillary Clinton will challenge Obama for the Democratic nomination in 2012! I know you're asking yourselves if I have some inside information. No, I do not. The only time Hillary and I have ever spoken was back when I was one of her constituents in New York, ten or so years ago.

You see, back when they still called the U.S. Citizenship and Immigration Services its non-PC name of just Immigration, my wife and I were having a bunch of shit thrown our way about her status. Which was when I called Senator Clinton's office. To set the facts straight, I am sure that Hillary was very interested in my case, but I actually spoke to an assistant to an assistant to... you get the idea. Um. We never actually "spoke" although I'm sure she tried to reach me.

So are we going to look back in 2 years, maybe a little longer, to see that I'm right? What do you think? Again off-topic, I hope one of these dudes or dudettes tonight put "Joe the Plumber" on their guest list. They made him famous but got him a bunch of shit, too!

I'm speech prepping myself tonight over a Founders Harvest Ale brewed by Founders Brewing Company in Grand Rapids, Michigan. This is my second from Founders after tasting their excellent Centennial IPA a week or so ago. Once again, the labels (as you may see from the picture below, depending on my photographic skills tonight) are very sloppily put on the bottle, both extremely crooked and not centered on each other. So I have just Christened this brewery the "Crooked Label Brewery" and plan on sending them a protractor for Christmas. This is also a wet-hopped ale according to the label.

Hoppy with fruity orange and watermelon aroma, floral too. Mmmm. The flavors are just as nice as the aroma. Grapefruit and pine are matched perfectly with sweet, fruity orange and pear flavors. Those fruity flavors are so juicy and refreshing, delicious and incredible! The beer then dries out a bit and shows just a touch of spiciness before finishing with a clean, piney bitterness. Wow, this is a home run! And not the kind that McGwire used to hit. The juice in this is legitimate. Get some!

Game Change: Obama and the Clintons, McCain and Palin, and the Race of a Lifetime 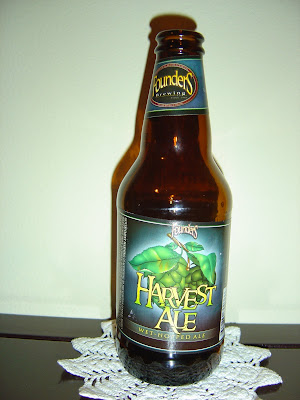