Definitely check out my update review of this beer, 6.5 years later!

This afternoon I'm drinking Lucky 13, A Mondo Large Red Ale (whatever that all means), brewed by Lagunitas Brewing Company in Petaluma, California. The label has a sexy vixen leaning through a giant horseshoe. Above her is a box that says EXAYEAYEAYE. Since that was nonsense to me, I typed it into best buddy Google. This dude over at Beer Advocate figured it out in 2007. It's 13, XIII in Roman numerals. Good to have friends.

I'm glad I have this beer mostly figured out and reviewed, because I couldn't help reading all the A and B-ish reviews over there. Seems like a pretty adored beer for their reviewers! Lagunitas goes on to make sure you can pronounce their brewery's name correctly: LAH-GOO-KNEE-TUSS. They also say they are proud to make their mark on history as "Beer is a Bronze Age Business..."

I drank this beer once before, maybe six months ago. You see, I had accidentally purchased a duplicate bottle in all of my enthusiasm on my Orlando beer trip! That day, I thought the alcoholicness was so prominent that I deferred a review of it until bottle #2. Plus I had a bunch of other beers that day and wanted to be fair. So today, it is the first beer.

The aroma is very complex. Sniff for a while. You get bitter grapefruit and hops along with orange and clementine fruity citrus. It's also malty with caramel. Spicy, fruity and boozy. Great aroma! The flavors start out with grapefruit bitterness, but other sweeter fruits blend well to balance that out. There are also some malty flavors that pop in along with some raisins and other dark fruits. Mr. Alcohol says hello pretty early in the morning for this beer, especially considering it's a big 22 bottle. (I'm not drinking in the morning. I just assumed you could handle metaphors.) Smooth and creamy. Brown sugar and some spiciness also step forward. Many complex flavors. The carbonation is a little on the low end, but it's adequate. After pausing a few minutes to type, the beer warmed. While I still feel like the alcohol is too prominent, it is less noticeable as I finish this beer. Maybe a little warming time is called for. I'll try that next time before I even start the bottle, but all of these rules for this beer seem like a little too much work. Decide for yourself. I like many other Lagunitas beers much better!

The Science of Sex Appeal 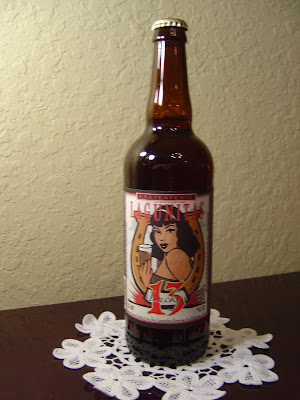 I really enjoyed this one and tend to like Lagunitas special releases a lot more than their normal line. I'm also a fan of their Hop Stoopid.

There was just something about this beer I did not enjoy, but obviously a lot of people love it. Such is life.

And Hop Stoopid? I LOVE that beer!

Cappuccino Stout! The one with sebastapol coffee. Undercover shut-down is tasty too