Did you all see the President's campaign speech last night where in front of the entire Legislative Branch and millions of viewers from every country in the world, he called out and intimidated the Judicial Branch's Supreme Court? What the fuck is he thinking about? Obviously he's not thinking or is just not as smart as he thinks he is. And Senator Chuck Schumer leaning into the Supreme Court members with his loud clapping, bullying and basically showing them up was also way out of line! He should definitely know better.

The idea that Obama's statement is acceptable because of "checks and balances" is ludicrous. This was not just a disagreement. This was the President of the United States at the State of the Union address using his Executive Branch privilege at a joint session of Congress to say the final decision makers on US Constitutional Law were wrong and he was going to fix it. I call Bullshit! And for those of you that say Obama is an expert on Constitutional Law because of his education, bite me! He has zero judicial experience. Again, smart, but not as much as he thinks he is.

Oh, and one more comment. This dude needs someone to tap him on the shoulder and tell him to drop the campaigning because he's already the fucking President! He must have missed that memo.

Tonight I am drinking Lucky Kat, an IPA brewed by Magic Hat Brewing Company in South Burlington, Vermont. This came to me via my SC connection. The only Magic Hat beer available here right now is apricot beer #9. Again, apparently Total Wine in Greenville, SC has some old stock on their shelves. My friend bought this "drink by the end of June, 2009 beer" in mid-January, 2010. If you go to that store and are a freshness believer, check before you buy. I'm going to let them know right now as well.

Citrus and fruity aroma, nice but not very strong. The flavors start out fruity, plenty of orange and pear, with no real hops or grapefruit bitter bite. The beer is balanced and not sweet either, though. Then there is a little pine and black pepper spicy flavor. The flavors are mostly subdued and although they are good, this beer is a little watery and has a hard time keeping up with its medium to upper-level carbonation. The 5.8% alcohol never shows up, which was fine, and the fruity flavors left on the palate last and are very pleasant. Pretty decent beer.

The Nine: Inside the Secret World of the Supreme Court

Bend Over - Here Comes The Change 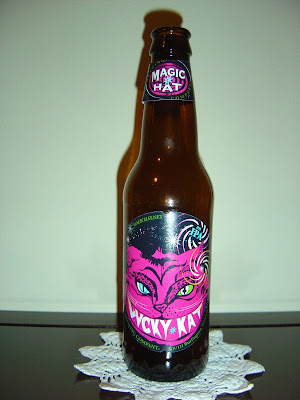 Stores in Brown Distributing (Bud) area- Palm Beach north of Boca are getting some additional Magic Hat items this week and next including #9 in 6 packs, the new spring seasonal Vinyl and the rotating mixed 12 packs. I believe we are looking at April for the rest of these items in the rest of South Florida thru Fresh Beer.

Hey Ed. Thanks a lot. I'm looking forward to that!