OK. All of you people are super smart, I know. So maybe you can help me out. I just watched a ton of news analysis shows with videos showing President Obama promising to be transparent regarding the health care debate and legislation. The essence of the videos is that Obama had a talking point and campaign promise of airing the debate on C-SPAN. Apparently the President of C-SPAN has called the White House to find out when that's all going to start, too. I guess he was waiting for change to just happen? If any of you geniuses know that schedule for C-SPAN, let me know right away.

President Obama, in one of his speeches (I mean debate answers), went so far as to criticize the Clintons for mistakes they made in the 1990's when they tried to move health care reform forward. Now I think that Hilary's plan was a disaster, but Obama said the mistake happened when they got their political cronies together and locked out everyone else from the process. Which is exactly what he has been doing for months now. That and... bullying senators, making sweetheart deals, and basically ignoring public opinion gauged by every single poll. Great leadership. Eat my shorts!

Tonight I'm going to treat myself again. I'm drinking a seasonal barleywine style ale--Old Horizontal brewed by Victory Brewing Company in Downingtown, Pennsylvania. If you've paid half an attention you'd already know that I'm pretty much in love with this brewery. The bottle says to enjoy this by November 6, 2014. Just in time! There is also a nice poem about winter and the beer on the label.

Fruity bananas and pears, sweet, juicy and alcohol for an aroma. First impression: high carbonation and big alcohol both get started burning down the city. I guess what I'm saying is holy big wow hotness and burn! A little tart to start (my poem). Cotton candy, fruity pear and apple, very sweet despite some hoppy flavors, syrupy thick body. Yep, more hot Beam-ish bourbon flavors abound! It's not that I can't appreciate this beer, but the 11% alcohol is much too prominent and dominates everything else. Just a few days ago I had Dogfish Head Olde School with 15% alcohol, and that one smokes this guy all night long! They are both barleywine style ales, and not being some (certified) beer judge, I don't know which hits the style markers better, but I certainly know which tastes better. Decent, not great. Alcohol is too prominent and the carbonation accentuates that even more. I'm a little disappointed! 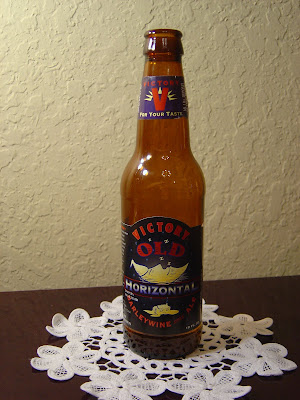 I am not a huge barley wine fan but I feel I need to try this because I too am a big Victory fan. I've been told by other people that aren't big on barley wines that it is a good one. But I'm glad you mentioned the bourbon like taste as that may turn me off to it as well. But we shall see. Good review.

I love Victory, especially Storm King and Hop Wallop from the ones I've tasted. This is definitely worth a go, though.