This morning Broward County, Florida had the first snow since the 1970's, or something like that. I was only half paying attention. Of course I was snug in my bed and didn't see the one flake flurry, but I will tell you it's cold! It was 34 degrees when I got my lazy ass out of bed around 9:30 am. Now I can already hear you people. Don't forget I'm from PA, went to college in NY, and lived up north most of my life, so I know 34 is wuss-land. But I've gotten soft, I will admit!

What has been really funny about a week's worth of this cold weather is how my kid's school has handled their uniform dress code. They are usually fairly strict with what is permitted, but this past week was hilarious. They don't know how or what the code even is for this situation, and every kid looks so out of place with mismatched coats and sweaters, etc. But to the principal's credit, they are mostly ignoring this state of (dress) emergency.

One other note. Fucking Eagles!

This afternoon I'm drinking Prelude Special Ale brewed by Shipyard Brewing Company in Portland, Maine. There is a really quaint snowy winter scene on the label. Drink this one by October, 2010.

The aroma is caramel and malty with some spice and alcohol mixed in, pretty inviting. You start with caramel and alcohol trying to meld together. Then some spices and molasses and brown sugar peek through. But the main flavors that come and never leave are an extremely sour lemon, like biting the peel along with some metallic booziness that really put me off. Maybe these guys were watching A Christmas Story where that kid got double-dared into putting his tongue on the pole. The flavors here are what I imagine he was tasting, but his taste could have been better. I did not like this beer at all! 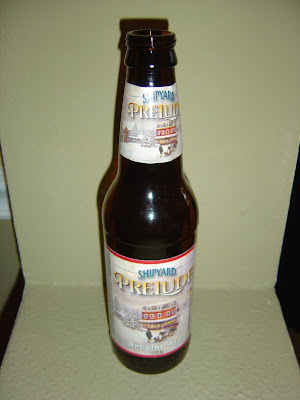