So when my friend texted from Texas (say that fast 5 times) asking if I'd ever reviewed Shiner Hefeweizen, I gave an uncomfortably unsure "no". So he very nicely brought me one bottle of it home with him. Then I found an identical bottle in the garage that I had purchased in August in Orlando. You all remember that trip! What to do?

Well, there are no "drink by" or "best consumed by" dates for either bottle, not that I really trust those anyway. But I decided to have a blind taste test for the "new" versus the "old" bottle despite the fact that they could have been from the same batch. It's really just an excuse to drink on a Tuesday (although not at Noon). The label says this beer is "For Every True LOVER OF LIFE!" It then goes on to say "ALWAYS SUNNY" which may refer to Shiner, Texas where the Spoetzl Brewery brewed these.

OK. First, I apologize for reviewing two Shiner beers in a row. After a thorough taste test and comparison of new versus old, these are the results... They are exactly the same! Goodnight.

The aroma is very light citrus with orange and honey, sweet. Flavors mimic the aroma in potency and components. Orange with honey. There is also some lemon and wheat flavors, kinda sweet still. Dirty and not that refreshing. A bit weak overall and very plain. Dry dirty finish. Not horrible; however, not something I'd reach for.

I lied. There were some differences that I might have imagined. The new bottle seemed to have slightly more zip from the carbonation. New also had a bit more grassy and earthiness, and just a touch more prominence from the lemon. To me, those are signals that the one I call "new" is a bit fresher, but the world may never know.

New is on the left; old is on the right. If you don't like my finger in the picture, too bad! 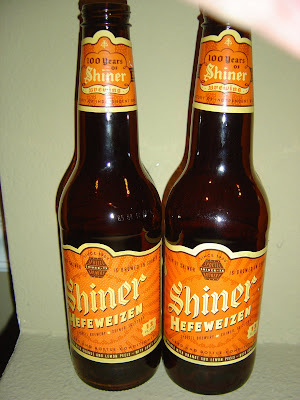