A Virgin Voyage to Total Wine and More 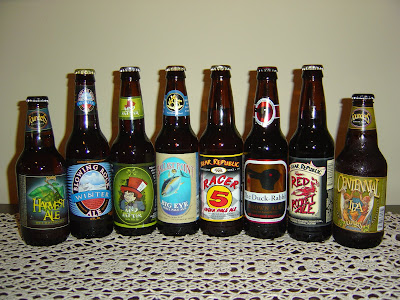 So I have this non-beer drinking friend. She reads this blog but stops when she gets to the beer review section. Jeez! She will put away a cherry lambic once in a while because it doesn't taste like beer, but still. But what she did for me recently defies the odds. This girl went into a Total Wine alone last week, and with the help of one of their workers there, picked out a dozen of the best beer presents you ever saw.

If you can imagine someone with a Christmas present wrapping fetish, well then you know this girl. NO presents have the same paper, NO rough edges, perfect bow on each. And that is how she packaged my beer. Why didn't I just get those beers myself? Why was she wrapping them up? Well, you see, she and the Total Wine were in Greenville, SC and I'm in South Florida. The other funny part is that she had an extreme paranoia about going to jail for acting like Judas Priest. In the end, I wont tell you how I got the beer because you are all very smart with outrageous imaginations. We probably just each drove six hours and met half-way. In the end, I must say, this was one of the absolute nicest things anyone has done for me!

OK. No more chit-chat. Except I guess that my guest needs a name. I bring you.... Beer Getting Girl.


It's a tough work environment. What’s a girl to do? Cut-throat bitch? Nope. Sleep with the boss? Nah, not my style. Hmmm. Bribe co-workers with beer? That could help give me the edge.

I decided who better than co-worker Beer Drinker to test out my theory. I'll let you know how things turn out with my employment here. I decided to visit my local Total Wine and More in Greenville, SC this past Saturday to pick up a few brews that he can’t get in Florida. I did not go unprepared as I also asked him for a wish list. What the hell is a Duck Rabbit? Hoppin' Frog? What is that all about?

I got to the store and easily found the beer section… but I was completely shocked by just how much beer this store has! I looked around the mountains of Bud and Coors Lite for a few unproductive minutes, until a stock boy (who looked like he knows his beer) came to my rescue. It was a true maiden in distress/knight in shining armor moment. My hero!

He scrambled to put on his “beer genius hat” and to give me details about every beer on the shelf! I stopped him and just asked him to help me load up the cart. (Did he really think that I was going to drink this stuff?) We’ll have to wait for the subsequent reviews to see if his recommendations were as good as they seemed!

On my way out I grabbed a couple bottles of wine for myself and took advantage of a knowledgeable manager who offered some great wine recommendations, all within my budget. The manager, identified as such because he wore a tie, was also perceptive when he saw the list of breweries in my hand and the beers in my cart. He clearly knew that I was "sent" and not the end user. A few questions later, he discreetly handed me some cardboard bottle dividers from a nearby wine box along with some handed down folklore on how shipping beer to friends fairy tales end. This place was magical!

Even the lady at the checkout counter was helpful… in her own way. Being as perceptive as the manager, and because she was eavesdropping, she gently mentioned to me that bootleggers can end up in prison for a long time. Thanks lady.

Despite nearly being totally scared out of my secret operation at the checkout, this was a stellar experience! As soon as I can drink the 6 bottles of wine that I bought for a party that never happened, I’ll be back! 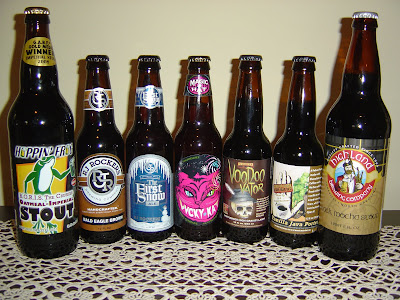 COOL! There are several Total Wine's in the ATL area so I will have to check them out.

BD, have you tried Terrapin's Big Hoppy Monster? (I thought I saw it here but cannot remember) I had some on tab last night at the local watering hole and it was great.

Yes, you REALLY need to check out Total Wine. Not only is their selection awesome, but the customer attention is superior as well.

I knew I had seen it! Yes, it was really great--had that nutty sweetness I like in an ale. Terrapin is actually less than an hour from my house--a field trip may be in order.

PS, that should be "tap" above but "tab" sorta makes sense too!