I don't own a Toyota and I don't really know all the facts, but it seems like a war is brewing (and that's not the only thing... rim shot! bam!). Isn't it unprecedented that Transportation Secretary Ray LaHood told Toyota owners not to drive their cars? "My advice is, if anybody owns one of these vehicles, stop driving it." Of course, he then said that exact quote was like defining what the definition of "is" is. Yes, he back-tracked to almost nothingness. Now what he advised owners to do was take their vehicles to dealers if they were concerned. Hmmm. Really?

Now LaHood doesn't make Toyodas, so he was just being an idiot! Rather the real blame for these stuck accelerators falls on Toyota. Oops. I think that maybe Toyota makes their cars the way they spell their company. Aiko Toyoda is the CEO of Toyota. Very puzzling!

This evening I'm drinking Big Eye India Pale Ale brewed by Ballast Point Brewing Company in San Diego, California. My first from this brewery. There is a big fish on the label, although I'm not sure which kind. The label also says "Get the Point!" and although I'm not sure what that means, it could be them telling the fish to come get the point of the hook. "No, you dumbass! Are you that stupid? That's a Walleye Striper King Fish and Get the Point means..." So just tell me. When I go fishing, I always have some salt-water nerd to help me out. And when the fishing sucks, we throw a bucket off the back of the boat and fight that to simulate fighting a giant fish! Anyway, this beer won a Bronze medal at the 2002 World Beer Cup so it must be pretty good.

Fruity, citrus aroma with plenty of malty caramel in the mix. Not huge, but nice. Flavors are a match to the aroma. Citrus and a solid grapefruit start things off, but they are immediately, and I mean in nanoseconds, balanced by some caramel and malt and bready flavors. Hoppy with some pine and oily texture, yet no bitter bite. Sweet with that caramel, but not sweet. "Balanced" is a very important word for this beer. It has all the flavors put together in a smooth, creamy beer. The medium carbonation was spot on. Now, I prefer a little kick in my IPA's but that's my fault. This was a terrific beer, and it DESTROYED the one from yesterday! Try it if you can.

Yes, I know the picture today is blurrier than usual. And yes, I also didn't feel like taking a second picture after I realized that! As I've told you before, buy me or give me some lessons. And I need a new camera. I listed one right above this from Amazon that you can buy me (or buy yourself and bring it over to show me how this photography stuff works). 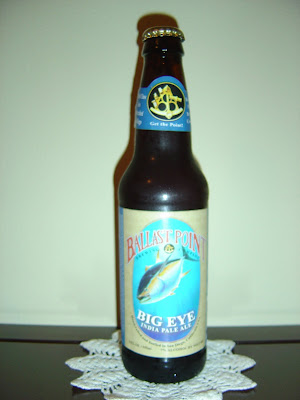 I love Ballast Point. The Big Eye is one of my faves. But you have to try the Sculpin and Dorado (if and when you find them), too. Check out my list of my top 10 IPAs at http://phillybeergirl.blogspot.com/2009/12/top-10-ipas.html. Big Eye and Sculpin made it on the list. And I visited the brewery while in San Diego.

Wow! Three things I love: Philly Beer and Girls. Thank you for coming over.

I went over and read your top ten, and I think it's terrific. I've had 7 of those 10. Unfortunately, your favorite Sculpin wasn't one of them.

Ballast Point is not available in Florida, and this bottle went from San Diego to Greenville, SC to Florida via the friend connection. But I do hope to try it some time.