A few weeks ago I posted an open letter to Bill O'Reilly and Fox News about the ridiculous volume that their commercials have. They really take on a life of their own! Last week, on more than one occasion, I had to turn down the commercial volume then turn the programming volume back up afterward. So so so so soooooooo annoying! So as promised, here are some advertisers from last week to boycott if you feel the same way I do about this situation. Let's send Fox News a message!

Don't buy products from these advertisers: Peachtree Settlement Funding, ADT, Advil, don't see From Paris with Love (John Travolta), Magic Jack, BoosterSeat.gov, Magic Jack (again), IRSTaxAgreements.com. And that's a very small percentage of them, written down when I had a pen and the initiative! Oh, advertisers, tell Fox News what you think about this, too.

This evening I'm drinking Bigfoot Barleywine Style Ale 2010 brewed by Sierra Nevada Brewing Company in Chico, California. I reviewed their 2009 version back in March of last year. Let's see how this compares, the beer and my hopefully more skillful review. The label has Bigfoot emerging from the woods while some dumbass inspects his footprints in the mud. His jackass knows better than he does to be frightened!

Very hoppy with some light fruit and sweet honey for an aroma. The flavors start out with a huge hop and pine hit. Very clean, crisp and refreshing flavors to start. Some spicy black pepper rushes in and interrupts that followed by an alcoholic teammate jumping the ropes when the ref isn't paying attention. The alcohol is noticeable and a slight warmer. Medium carbonation is perfect. Along the way you will taste some orange citrus, more pine and a small amount of caramel. The beer is a little thicker and less refreshing toward the end. Bitter is left on your palate for a nice finish.

Essential Mozart: 32 Of His Greatest Masterpieces 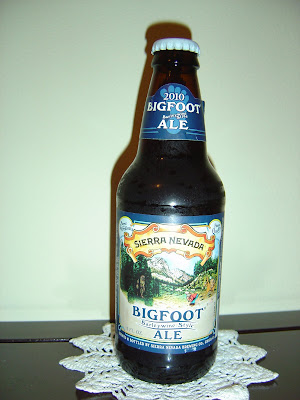