Hoppy Valentine's Day! Is that cheesy enough for you?

So the wife and I don't go super-all-out on this holiday, but we try to make it fun. Let's start with the flowers. Guess what? My wife works for a company the imports flowers and this time of year they have a kajillion of them. She brought her own dozen red roses home. Jealous?

What did I give her? A card with two things in it. First, a list of Kay Jewelers locations inside it. No, it's not what you think. I wasn't a sucker for their ad blitz. Rather, we're trying to take advantage of some super sales to replace the engagement ring she lost two years ago. Second, a handful of Victoria's Secret models in some sexy lingerie. Oh, and I superimposed my wife's head on each one and told her to choose one of them. Genius? Yes. That way I don't need to show my face in their retail outlet either!

Then the plans. First to Kohl's to use a $10 coupon from the El Sentinel paper I lifted from my neighbor's driveway yesterday. I couldn't understand the coupon and neither could the Kohl's cashier. Spanish. Pfff. I got $10 off on a pair of jeans replacing the cool ripped ones I have that the wife doesn't think are so cool. Then pig out at the Asian Buffet which was mobbed, but delicious as usual. After we got home, my wife realized she lost another ring at the Buffet. Nice ring too, but I'm guessing we'll never see it again. Unless we see it on the asshole's finger that would just steal it off the bathroom sink instead of turning it in to their waitress. It's not like it was a quarter on the floor!

This afternoon I'm drinking Éphémère brewed by Unibroue in Chambly, Quebec, Canada. In honor of the Vancouver Olympics, you ask? Dream on! Pure Coincidence! The label has a picture of a nice juicy Granny Smith apple in front of this winged fairy lady in a slinky flowing dress. This is a seasonal ale and this bottle is best before 07-08-11. Anyone have the English translation for Éphémère? I did look but found a few and was confused and finally said screw it!

Nice tart apple aroma, my favorite apples, Granny Smiths. So juicy. Apple flavors to start, very dominant. The expected (because it's Unibroue) high level of carbonation along with the flavors make this taste almost like apple cider. Tart and sour exist but this is on the lightly sweet side overall. This beer could easily be substituted on New Year's Eve for some champagne--it hardly resembles a beer. Some spice toward the end but that's it. Refreshing too! I liked it. Barely a beer, but the flavors were good. 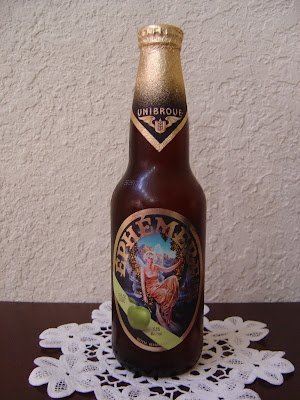 I had this beer a few weeks ago and I really, really liked it. Funny how everyone's tastes are different. I thought it just tasted like a nice crisp beer. Didn't notice the apple as much as I notice the cherry and blackberry in Sam Adams.

Ever try a La Fin du Monde? Love that beer. I think it translates to 'end of the world' iirc.

Thanks for stopping by. Definitely a nice crisp beer. Thought it was terrific and refreshing.

La Fin du Monde. Yes, I'm a fan of that as well. Unibroue is a pretty awesome brewery!