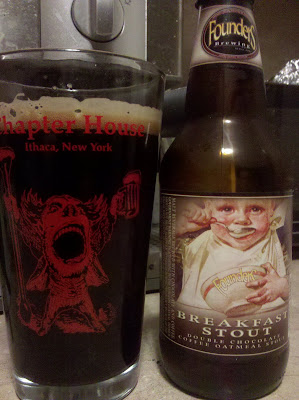 I don't know where I happened upon today's guest reviewer, but I know what caught my eye. Two of his favorite places to drink beer are on my radar: Zeno's Pub in State College, PA (near where I grew up) and Chapter House in Ithaca, NY (where I went to college). Let me tell you that neither beer list looked anything like that back in the early to mid 90's, zero resemblance. In fact, the year I lived two doors down from Chapter House (you gotta see this picture) with only some tree-hugger-organic-sprout-sandwich-shit type place in the middle, I still barely went. This place was a "local" bar, meaning townies, and there were two giant Rottweilers always roaming the place at will. Anyway, today's reviewer, BEER PANCAKES, kept his breakfast theme going with the beer he decided to review. And for sure check out his blog!

Good morning! I think it’s time for a beer. My first experience with beer for breakfast came in college when I was awake early in the morning and I had some beer in my fridge I was eager to try. Having nothing else to do that day, I decided to crack open an oatmeal stout. As I was pouring it, my friend walked by and said “Dude! It’s nine thirty!” I told him that it was an oatmeal stout and obviously oatmeal means breakfast. He acknowledged my superior logic and I marveled at the world of possibility now that beer consumption in the morning was justifiable. Besides, everyone knows that you can’t drink all day if you don’t start in the morning.

As I drank more and more beer, I discovered that oatmeal is not the only breakfast food to be found in beer. There is also chocolate, coffee, and let’s be honest, the grain in beer is just like eating Wheaties. Combine that with the citrus and grapefruit flavors in hops and you basically have breakfast in a convenient 12 ounce bottle. My favorite breakfast beer is Founders Breakfast Stout. Not only is breakfast in the name, but it is a double chocolate coffee oatmeal stout!

The beer pours black with a light brown head that looks like chocolate milk. The nose has a lot of coffee as wells as the dark roasted grain and slight hint of cocoa. The taste is like a frozen espresso drink. The mouthfeel is a little thick and the finish is dry. The bitterness from the roasted malts seems to stick around the longest. As the beer warms up, the chocolate makes itself known as well as a little tingle from the 8.3% ABV. I don’t recommend drinking this beer straight from the fridge, since the beer gets more interesting as it warms up. This beer is delicious. So wake up, smell the bacon and pour some beer with breakfast.
Posted by Beer Drinker Rob at 2:10 PM

I think that I have been inspired to have my first breakfast beer in the morning. Eggs benedict and Short's Cup O Joe!

Hey Chuck. Me too!

I think I will have to put this one on my "list."

Yeah, bunny. This one's on my list too. We don't get that stuff here.

Beer Pancakes went to the same college I did, the same bars I did. Granted, a few years after I did, but the one thing he did better was stay in a better beer zone.

I have been dying to try this beer since last year. MUST FIND IT!!! I love the sound of it. Have you had Mikkeller's Beer Geek Breakfast? That would be an interesting comparison

This one has eluded me as well. This fresh-out-of-college guy has things fall in his lap, right? Follow @beerpancakes and trade him for something. He might do it!

If it still opens @ the crack of dawn on Slope Day or St. Patty's try a hearty 'Breakfast' @ Dunbar's. The original breakfast beer!

It is probably only 1 of 2 bars still remaining from your time on the Hill. Chapter House recently met an unfortunate end.

I spent many nights in Dunbars. Wish I got back to Ithaca more but living in Miami makes that pretty difficult.

Too bad about Chapter House too though I hear they are rebuilding.