Super Bowl Sunday. Who's playing? Oh yeah. Peyton Manning and the Colts versus Drew Brees and the Saints. How many times are they going to show Archie Manning and Peyton's little brother on TV? Snore. Brees was spectacular during my fantasy regular season only to screw me over in the fantasy playoffs. At least Brees finally gets to play in Miami!

Don't know who to root for. The game takes place in whatever the hell they call the stadium where the Marlins play now. It's like 4 or 5 miles from my house. I've had to avoid the area altogether for over a week now considering the ever-popular Pro Bowl moved from Hawaii to here this year. Holy shit are the cops out in full force. Blinking the wrong way at a Domino's Pizza in Hialeah will get you tased! OK that didn't really happen. I hope at least the local retailers sell a shitload of booze and beer and get rich and make the local neighborhoods not Hoods.

Anyway, after 36 grueling holes this morning (of mini-golf with my children), it's time to settle in for a nice afternoon of beer and TV. Of course I need to cram a review in here real quick, and balance my checkbook, but I have plenty of time considering I can't stand the non-stop BS analysis that is going on right now. Anyone know what time kick-off is?

Today I'm drinking Garde Dog brewed by Flying Dog Brewery in Frederick, Maryland. According to the label, this seasonal is in the traditional French farmhouse ale style called Biere de Garde. The dog on the label is vicious, the kind you might see keeping sports rioters at bay.

Floral and fruity sweet aroma, with a hint of spice. Citrus and fruity flavors start things out, but in a strange way. You have the sweet apples and melons along with some honey sweetness, but at the same exact time you have a lingering tart sourness. Musty, too. As the beer progresses, there is a definite spiciness. Nice medium carbonation makes all the flavors stand out. Dry finish. This beer was really unlike any that I've had before, and while I won't say I loved it, it did start to grow on me by the end of the bottle. Interesting. Try for yourself!

The Ultimate Super Bowl Book: A Complete Reference to the Stats, Stars, and Stories Behind Football's Biggest Game - and Why the Best Team Won 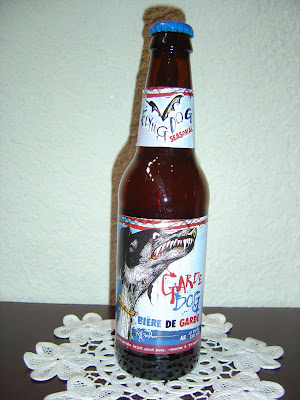