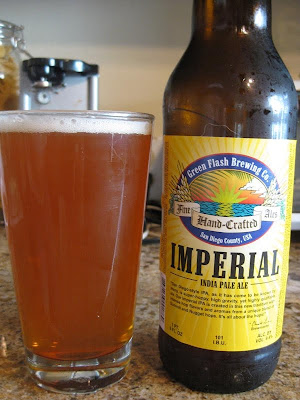 A few weeks ago, I asked The Cooking Asshole if he was ever going to drink another beer and do another guest review, considering the first one went over so well. Of course I know he's drinking (mainly Costco brand beer), but he's been so busy promoting his VOTE Griffin (anti-Unicorn) and VOTE My Haiku polls, he forgot it's about the drinking... and sometimes... his cooking. Anyway, here he is trying to make some more friends amongst the well-known craft brewers.

Green Flash Brewing is from San Diego. What else is from San Diego? "That movie 'The Anchorman?'" Not a movie jackass! Think beer. "Oh! Stone. I get on my fucking hands and knees to worship Stone. They are just so amazing. They are the messiah of the craft beer movement!" Fuck you and fuck Stone. The hype is insane and it has more to do with their marketing than their beer. Look at their damn website! That shit is PRO.

Green Flash proves that you can easily beat Stone at their own game in their own fucking hometown, bitches! Apparently Green Flash was historically a "session beer" company and then they turned to craft beer. They attribute this 180 degree turn to the successful release of their West Coast IPA. I have no direct knowledge but I am willing to bet they saw what Stone was doing, how successful they were at it, and changed gears to keep their own company afloat. Good decision.

Luckily for Green Flash they don't have to rely on bullshit marketing since their beer is incredible. My first experience with Green Flash was Le Freak. This is a Belgian-style IPA that was one of the first ever released in the states. It is amazing. I do prefer De Ranke Bitter XX but that goes without saying. In any case, Le Freak is way better than Stone's Vertical 090909 and this Green Flash Imperial IPA is WAY better than Stone's Ruination IPA. It has an orange hue and amazing citrus notes. Just the way I like it. Especially when it is 9.4%

This beer sits in my Hall of Fame:

Green Flash Imperial IPA. Fucking suck it Stone. Admit it, you are just not that great. Losers.
Posted by Beer Drinker Rob at 6:51 PM

Here for the Beer said...

The stone vertical series isn't meant to be consumed yet - you are supposed to wait till 12/12/12 (when the world will apparently end) to consume each of the series as a vertical tasting. however i recommend trying them on 12/11/12 in case the world actually does end on 12/12/12 so that you don't waste perfectly good beer.

Hi Anonymous. Thanks for clarifying.

HFTB. It's tough to buy a beer that you can't drink. I drank mine and didn't wait. Hopefully someone with a little more self-control will have one to share with me on 12/11/12.

they want you to wait?!? What fucking assholes! YOU wait to sell it to me dickheads!

I love Kettleballs! Mmm! I like to suck on them! They are real good!

I am Greek! I am Yiannis the Greek!

To the above poster. I see by your IP address that you are from California. All I can say is that it figures...

What?! Russian River and Rogue totally rely on bullshit marketing. But you know what, they make fucking awesome beer. I live in California right now. If you are a hophead, it's great. (Oh, I guess they'll also rock the belgian styles, if you're willing to bleed money for it.)

Like most things in California (houses, food, you name it), the price far exceeds the quality. I prefer more balanced beers. This beer was not for me. It tasted liked I was sucking on the dregs of my brewkettle. I much prefer Stone's IPA, and Arrogant Bastard. Of course, if you beers 100+ IBUs that are, in my opinion, fairly one-dimensional, then go for it. We like to call anything novel an innovation here, so the more hops the better, right? Right?