Nice evening tonight so far (except for the part when I answered the door a few minutes ago to a parent saying my son was being nasty with her daughter. Lovely!) Anyway, before I left the office, I called up my local Total Wine to see if the famous Hopslam was delivered today as scheduled. Cinderella (not her real name) said it had been and that it was flying off the shelves. Now I had already called and been over there twice this week for just this occasion, and she could sense that. So she said despite not knowing if it was permitted, she'd put a six pack on the customer service desk with my name on it.

Sure enough. It was there when I arrived. And they weren't sold out anyway, but you never can be too sure with only five cases total making it to this store. But guess what? Tomorrow I have a Social Media Beer Get-Together at the same store, and our awesome leader has reserved some Hopslam for our tasting! There will be other cool beers including some I've never heard of and most I've never tasted and even some home brews. But most of all I'm looking forward to meeting the other cool Florida people on the beer scene. In addition to our leader (see above), you have Mike (already cool because he's a Phillies fan) and DosBeerigos (who is leading the overall BOB Award voting, (subliminal) vote for me) and BrewSleuth (you met her yesterday) along with some others I'm psyched to meet! I'll let you know how it goes for sure!

Tonight I'm drinking Hopsecutioner India Pale Ale brewed by Terrapin Beer Company in Athens, Georgia. This brewery has provided me with some sheer pleasure with some of their beers. The label on this one has a turtle with the black hood over his head ready to "off" someone or something. It also says "YOU MAY LOSE YOUR HOPHEAD OVER THIS ONE!" Best if enjoyed by the first week of July. It doesn't say the year, but since I bought it yesterday, I'll assume 2010. I assumed something last night and it didn't work out too well for me, so I'm risking it!

Hoppy yet sweet aroma with plenty of pine and softer fruits. Nice flavors too, very much matching the aroma. Lots of pine and citrus to start but sweeter fruits like pineapple and peach and pear were very noticeable. There was NO grapefruit astringency in this beer (which is just an observation, not a knock). There was a little hop kick, but still this was very balanced. The medium carbonation was good, yet maybe just a little too prickly. The 7.3% alcohol was masked but played a drying role on the back end of the flavors. Nothing is left on your palate when this is over. Clean, refreshing and delicious. Try this beer for sure. You will like it! 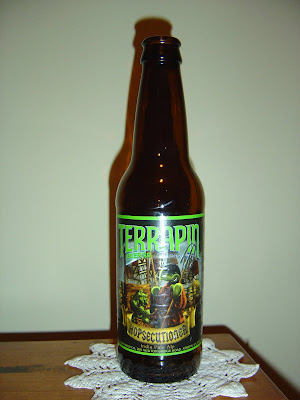 Looking forward to our tasting. I love Terrapin and this IPA was no exception. Just delicious!

I'm looking forward to it, too, Ed. I was looking in the classroom you reserved (the door has a window). It's really big. Do they have a ping-pong table too?