My second grader got 100% on his spelling test yesterday. Considering all the words we're paired homophones, it also means he nose witch word goes with which meaning. That brings me two ask why sew many adults can't stop making simple grammatical mistakes that oui expect even hour seven year olds too understand.

Four example, won of my favorites happens when I reed blogs and comments wear there authors have sum sort of difficulty understanding the difference betweeen their, there and they're. Why can't the adult community figure out THEYIERE'RE shit? Its fucking simple! Same with it's - its and break - brake and tons of others. Please! I'm begging you!

Enough of that mistake writing style. Its harder to right like that then correctly.

Today I'm drinking Rugbrød brewed by The Bruery in Placentia, California. This will be my third beer from this brewery after enjoying, but not loving, both Orchard White and 2 Turtle Doves about a month ago. The wine-sized bottle is very nicely presented, as usual. The label says this is a JuleBryg-Style Dark Rye Ale. It also says "SAY WHAT?" which I'm guessing refers to the response you might get to the beer's crazy name. Serve at 50 degrees.

So I probably opened this up a little below 50 degrees, but whatever. I have plenty of beer and plenty of time. The aroma is full of rye, with burnt and roasted caramel, even a little nutty. The flavors are a little different. Lots of chocolate flavors along with some spicy black pepper dominate the flavors to begin. Also, the giant prickly carbonation makes sure you know it's there. Rye and bread, for sure, and a distinct nuttiness shows up, too. As the beer warms up just a tad, some smokey flavors start to persist, and the nutty flavors get more pronounced as well. Well, I mentioned the big carbonation. The body is pretty big too, lots of big flavors competing here, mostly with good sportsmanship. Burnt malt, hints of sourness, burp! The 8% alcohol is not a factor. Dry finish with burnt aftertaste. Very interesting! I'm glad I drank this (actually, unusually, this is taking forever to drink), but it's not a favorite. Let me know what you think. Also, I bet this beer would kick ass as a cooking ingredient, for someone with some skills!

When Will Jesus Bring the Pork Chops? George Carlin 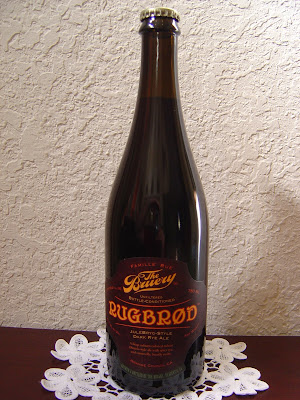