So Alec Baldwin and his wonderful daughter Ireland are at it again. Ireland called 911 and had her dad taken to a local hospital after stating he made statements saying he may harm himself. Now, I don't know about you, but I find that extremely hard to believe. There is hardly a celebrity that loves himself in every way more than Alec Baldwin. That's probably why he was released an hour after arrival. I bet he went home and chewed her out again, if she hadn't already run back to mommy. I know I would have!

Anyway, despite his extreme love of himself, you gotta feel for him in how his daughter treats him. That spoiled little brat should have some difficulties in her life! So people, support Alec by watching the Academy Awards in the beginning of March. I might stop by for a very few minutes.

Tonight I'm drinking Star Island Single brewed by Smuttynose Brewing Company in Portsmouth, New Hampshire. The label has a picture of a mermaid with huge bright red hair; she is leaning against a jetty and toasting the sea with her seashell encrusted mug. Interesting. This is a "session ale brewed with spice". I missed the best before November, 2009 date--I'm sure it's my fault on this one!

Fruity aroma, light fruits, not strong but nice. Fruity flavors also start out the flavor profile. You will taste plenty of peaches and pears and sweet apples. They are intertwined with a syrupy and sort of fake fruit juice taste. Sweet but not too sweet. And there is some honey flavor that persists as well. Medium carbonation, light to medium body. Some muted spice shows up toward the end but it's not very noticeable. A pleasant fruity and yeasty finish sums this up. Simple, decent beer (which, by the way, is what I think they were going for). Not a probable repeat for me, however. 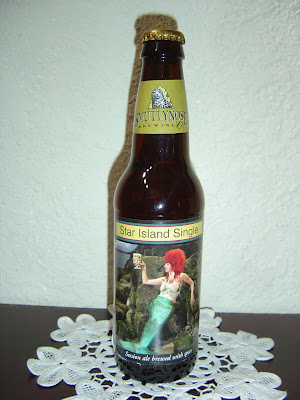