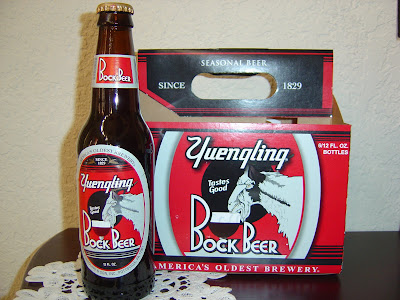 Being a Pennsylvania boy, I was delighted this morning to find Yuengling Bock Beer, brewed by D.G. Yuengling & Son in Pottsville, Pennsylvania, on the shelf at Total Wine. Not only was the beer there, but so was the Gold Coast Distributing dude who was putting them in the fridge. He was just delivering them so I'm quite certain this was the first sixer out the door. Then he started chatting me up about the 500 case deal of this beer that they got, and how Dick Yuengling shops in the Total Wine in Fort Lauderdale while he spends winters here in Florida.

As America's Oldest Brewery, Yuengling brewed this beer last year in honor of their 180th Anniversary. They hadn't brewed it for around 40 years until then. The reception was so great, that they decided to brew it again this year. Even the label artwork is based on the original from 1941 Bock Beer. Pretty Cool. It's a goat of some kind saying "Tastes Good". I promise to take you a picture as soon as I can find my damn camera; I think my wife took it with her today!

So, Mr. Yuengling, a few of us are having a little get-together at Total Wine next Saturday 2/20 in Pembroke Pines. Being from Pennsylvania and a lover of your beers, it would be an honor to meet you if you are available to make it.

As with all the Yuenglings I've had, this is another twist off. Grainy aroma, maybe even some fruitiness in there as well. More powerful and nicer than the regular lager. The flavors are much deeper as well. Rich roasted malts along with bread flavors. There is also a nutty touch that is unmistakable. Some hops give a little bitterness and also some herbal tea qualities. Is there a little sourness hint there? I think so. Medium carbonation is right on. Lightly spicy toward the end. You finish with a lingering roasted malt left on your palate. I think this just might be my new favorite from Yuengling! I usually drink their Black and Tan. Get it if you can!

Here is where the picture will go when I find my camera. ONE DAY LATER... The camera was in our safe! I keep telling my wife if she doesn't trust the lady that cleans the house once a month, to find someone else. Ridiculous. 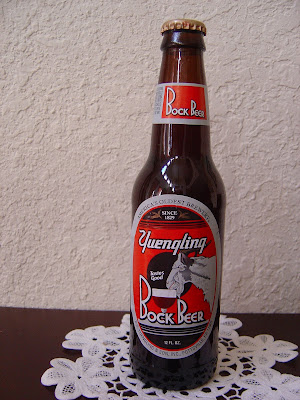 I did not know that Dick Yuengling stayed down here during the winter. I too would like to throw out the invite to him to come out on 2/20. I too am a PA boy and would love to meet him. :)

Well, that's what this dude from Gold Coast said, but he sure seemed to know what he was talking about.

And before I even wrote this post, I sent Ed an email asking if he could invite him. Dick's phone number is on their website, but I am betting Ed knows someone...

The packaging and label on that is f'n awesome!

Yeah, it's pretty cool. If they'd have put the label on straight, it would've been even better.

Would love to see Yuengling products make it to the Midwest (Nebraska) someday. I lived in PA for several years in my late twenties / early thirties and boy do I miss it.

Going to Myrtle Beach in March for a golf marathon...Yuengling Lager and Bock will definitely be flowing...can't wait

Sounds like a good time. Drink one for me.