To quote Andy, "You, me, bar, beers, buzzed, wings, shots, drunk, waitresses, hot, football, Cornell-Hofstra, slaughter, then quick nap at my place and then we hit the tizzown."

Look. Just yesterday I told you to "Mark My Words" on a Cornell basketball victory today. Of course they destroyed Temple in an awesome upset. Hopefully that will put a smile on the students' faces there, as there has been a rash of suicides this school year. Back in 1994, the year I graduated, Cornell got the label of "suicide school", but this year is ridiculous.

So I'm celebrating the Big Red (Bears, sometimes) victory with a Big Red (Imperial Red Ale). I think it's officially just "Big Red" but when we need a mascot or something to taunt the visiting team, they dress up a bear to do it. Here is the story of the real bear these dudes used a hundred years ago.

Malty caramel and spicy aroma with a very distinct hoppiness. Flavors start out with sweet caramel and a spicy black pepper kick. Nicely balanced. A little toasty and a little fruity at the same time. You will notice the 9% alcohol on the back side, but not too much, just in a drying role. There is a light metallic flavor too before you finish with a touch of bitterness. Medium body and low to medium carbonation. Very flavorful. Another good beer from this brewery! 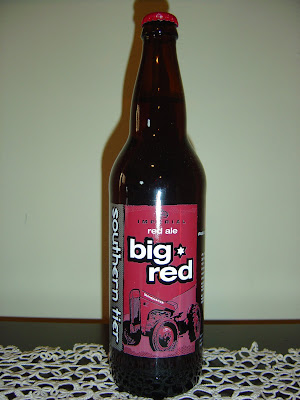 I didn't know you went to Cornell. Look at you big Ivy League man. haha I thought you were just being a self hating Philly sport fan but I guess you have your reason for cheering Cornell.

Yeah, Mike. Solid B student in the Chemistry program. That's where I lost my interest in brewing any more.

So, yes, that's why I was rooting for Cornell. And one of my brothers went to Temple, too, which added to the interest!

Aha. I have a few friend that went to Temple too and they were pretty pissed. I'm more of a Nova fan but try to root for all the Philly area schools. I wanted to go to Penn when I was little. That dream went down the drain quickly.

No one wants to lose the smart kids who have no athletic scholarships. I do like Temple and Nova.

And,wow, Nova almost choked a few nights ago too. That would've meant Philly fans burn some police cars, if you know what I mean.

Yeah, I was at work while that game was going on and seeing people tweet that they may choke was really getting to me. I don't think they will do nearly as good as last year but they need to step up if they are going to win the next one.