So a couple of you readers requested a post with another more personal story and less nonsense. You guys know who you are. I'm guessing it's because they have begun writing my memoirs, the unauthorized versions, and are competing with each other for the scoop. So OK. Here you go, the short version, but WITH nonsense!

I worked in a cancer research lab after college, yes, a scientist. After a year there, I noticed this other lab rat on the other side of the wheel we worked in who was really cute. That is when I made it a point to make sure I was "around" more often. She never knew I liked her though because before I could say anything, a bunch of us went out to a bar (yes, the Ramada) one Friday night after work, where I had the privilege of meeting her husband. WTF? No ring? Well, no, not in the lab where we handle chemicals that melt and contaminate gold radioactively. Occupational hazard (for me). Oh, and under his sweater was his FBI-issued weapon. Yep, I was "in love" with a chick married to an FBI agent! So that was the end of that! This was 15 years ago so it's funny now, but I'm still glad there's no chance in hell this chick reads this drivel. Personal enough? (And no, not since grade school has FBI meant Female Body Inspector).

Tonight I'm drinking Brooklyner-Schneider Hopfen-Weisse brewed by the Brooklyn Brewery in Brooklyn, New York. This beer is the result of a brewmaster collaboration between Brooklyn Brewery's Garrett Oliver and Schneider Brewery's Hans-Peter Drexler. So that means it should pretty much kick some big ass! This is a pale weissbock and "a delicious blend of Bavarian craftsmanship and American ingenuity".

The aroma is outstanding! Hoppy and spicy with banana and wheat and lemony citrus. Fruity and floral, too! Lemon and orange citrus to start with a decent hoppy bite right up front. Spicy with some cloves, wheat and bitterness. Lots of banana flavors in this beer along with some background fruity watermelon. Carbonation is active yet is not an asshole (if you know what I mean)! Perfect medium body. Drier, bitter finish with a touch of its 8.5% alcohol. Very flavorful, quite lovely. Not crisp or refreshing, and I was expecting both, but that doesn't take away from the beer. Style guides are "guides" only and any strict interpretation is for nerds. Overall, an excellent beer! I bought this wine-sized bottle a few months ago. There were a few left locally not too long ago, so if you see it, grab it NOW!

What Every BODY is Saying: An Ex-FBI Agent's Guide to Speed-Reading People 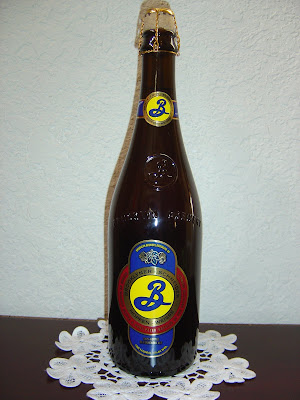 I've really enjoyed reading your blog! "Carbonation is active yet is not an asshole" cracked me up.

Thank you very much for the compliment. I just visited your site as well and got a kick out of the most recent post title.

As far as my comment on carbonation, there are some beers that just don't play nicely with the others. Haha.

Thanks again for stopping by.