Good morning! Welcome to another year with a day that they fuck up the 24-hour drinking schedule, giving me less time to accomplish my goals. With the Ides of March brewing tomorrow, I better get a jump on those! Depending on how you look at it, the shorter day could be a good thing, considering it's also my wife's birthday! LOL! Dude, don't write me your bullshit emails. I already made her breakfast in bed, baked a cake, and pretty much did everything around this place this morning.

To accomplish: beer review, below; getting all my tax crap together for my accountant before he has a conniption; pay bills and balance checkbook; drink a case of Yuenglings ($16.99 PA people, I know you can't touch that!); finish fixing the Power Wheels Ford F150 for the three year old; I don't really give two shits, but apparently Danica is racing today in Brazil for all of you oval lovers--that did remind me to renew a few domains at GoDaddy, though, so I guess she paid for her sponsorship. And probably a bunch more crap to do, too!

I do really dig this jump forward in time, though. I can play with my kids outside until 7:30 PM or even later. And who gives a crap if it's dark when you wake up? The end!

This morning I'm drinking Claymore Scotch Ale brewed by Great Divide Brewing Company in Denver, Colorado. And yes, you heard me right. Even with the hour jump forward, it is still the morning, and I am drinking this beer. Don't judge me! The label says this beer is named after a medieval Scottish sword, and is brewed as a tribute to the legendary "Wee Heavy" beers of Scotland. It's also supposed to "make [me] feel like nobility". They do have some suggested food pairings, too, but pot roast with roasted vegetables, seared lamb shank and bread pudding are NOT on the menu at this time. Bottled Jan 29, 2010.

Caramel and spicy aroma, very malty and a hint of smoke. Lots of malty caramel and a giant smoky blast start off the flavors. There is a decent hop bitterness that is keeping this very nicely balanced. Rich bitter chocolate, rich dark fruits, a hint of burnt flavors too. The medium carbonation is right on, and the smooth, creamy texture is awesome. Dry the whole way. I really liked this beer! I am not a smoke lover, and it was big in this beer, but I still thought this was terrific. And a little warming let that smoke mellow out, so the end of the beer was the best! Get it now. 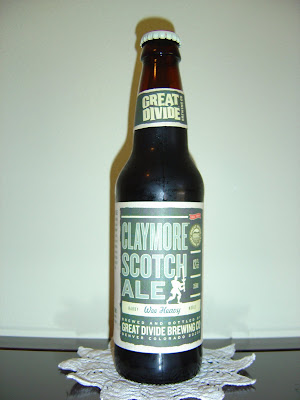 This one sounds fabulous! I may be making a "beer store run" this weekend and will add this to my list.

Yeah, bunny. Check it out. I've been hit and miss lately.