I celebrated my 500th post yesterday by buying myself a new car today!  Actually, Volkswagen Credit was telling me that I had until April 2 to return it or be in violation of the lease agreement. But I still got a new car, so let me use my imagination a little.

My wife had already practically picked out the Mazda CX-7 as the car we were going to replace the Passat with. So right to the Mazda dealership. As we approached, Jimmy, with the company 27 years and multi-award winner, introduced himself. Very nice guy, made me not want to fight as much as I was prepared to, knocked off a few dollars in the end, shook my hand, filled the tank, cleaned the car, took care of returning the VW, and got the paperwork done. I'm tired of the usual bullshit that goes on in car dealerships, so the less-than-two-hour trip today, which included a test drive, was great. If I will be paying a little more because of that, so be it! I'd have taken a picture of the car for you, but the wife already has it out this afternoon. But you've seen it. BTW, my other care is a Maserati!

This afternoon I'm drinking Fish Tale Organic India Pale Ale brewed by Fish Brewing Company in Olympia, Washington. The label is very busy with orange fish swimming in green plants. Tons of messages too. Organic, duh, certified by the Washington Stated Department of Agriculture. Please Recycle. Keep Refrigerated. Even the cap is decorated and says in microscopic type, "YOU SHOULD'VE TASTED THE ONE THAT GOT AWAY!" Finally, my favorite, "Spawned on Date: December [must be 2009]". Whew, I'm worn out.

Very pleasant and sweet, fruity aroma. Lots of ripe peaches and nectarines along with some honey. The flavors, though are somewhat different. They start out with a big caramel maltiness and some toasted, grainy bread flavors. There is an orange and other fruit presence, but not too prominent. Some hops do show up and give a nice bittering balance. Carbonation is pretty low, almost flat, and I wish that were higher. Medium body. My initial reaction was that this was a bit strange, but I'll tell you what. By the end of the bottle, it had grown on me a bit. Nice beer! 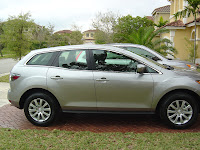 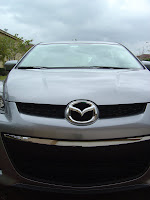 Next Day Photo Update: Here is the new Mazda CX-7 from the side and from the front. It's not a very nice day, but the silver color really shines when the sun is out!

Oooh, I've never heard of them. Sounds like for an IPA, it was not that hoppy. I checked out their website and it has won some medals. I'll have to look around my local beer stores and see if we have it.

Yeah, Marie. It was a little different. The label is screaming "buy me!" so if it's there you should be able to find it. I think the word Organic just has that obnoxious attribute! LOL.

in my book, organic = tastes like tree bark. bwahahaha

Thanks, I drove it home from the dealership, but likely wont get another shot for a while!