I was over on that Twitter thingy this morning and someone posted this Adweek Blog short about Cornell Law School embracing Andy Bernard from The Office. Being a Cornell graduate, although not from the Law School (I snuck in plenty of times to study in serene quiet though), I must say that is so fucking awesome! Even though Andy's banner is rotating with 5 or 6 others, his "I went to Cornell... Ever heard of it?" always makes me laugh. Below the banner is a link to another site with a bunch of Andy quotes, all terrific. There are, however, a bunch of stiffs at the top of the University and Alumni that lack a sense of humor, and don't like this promotion. They really need to get over it, like this law student:

Question: What person has influenced your decision to apply to Cornell?

Answer: Andy Bernard of Scranton (from NBC's The Office).

Tonight I'm drinking Island Creek Oyster Stout brewed by Harpoon Brewery in Boston, Massachusetts. This is "Session 30" in their 100 Barrel Series. They further go on to beat a dead horse with a "Limited Edition Small Batch" seal. Neat presentation though, including the gold foil over the cap and neck of this 22-ounce bottle. OK, you got me. I'm intrigued by "brewed with freshly harvested Island Creek Oysters".

Malty coffee aroma. The flavors start out with some chocolate and rich coffee, plenty malty and plenty roasted. Smooth but very thick and very low carbonation, almost flat. That was a turn off. Then this smoky flavor started to persist mixed with a saltiness that was not flattering. I feel like I'm drinking a leather shoe! No oyster flavors, either, although I thought that part was doubtful. Halfway through the beer I am wishing it was all over. There is a really annoying astringent drying component that just leaves this roasted, bitter, burnt smoky coffee flavor behind. Sorry. I'm done! 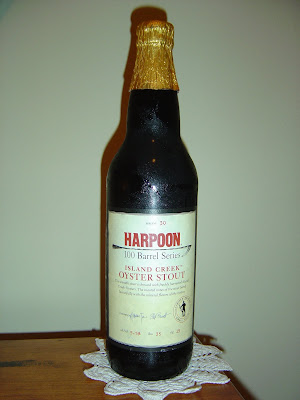 So I'm cycling through dozens of Google Reader beer blog posts when I stumble upon this post. I pass it at first, only catching the name of the beer (I'm thinking...another review of an over-hyped brew). Seeing Andy's picture, I realized it was your blog and I though to myself "Beer Drinker reviewing a limited edition beer? He damn well better not get caught up in it all" and I backed up to read.

Many thanks for "keeping it real". Your non-beer-douchiness deserves an award. :)

Hey there. This beer might be limited edition, but it hasn't sold out in my Florida store in over a month. Tell you something?

I don't care who the brewery is, I don't work for them and I call it like I see it. If challenged, I am happy to point those people to others that agree with them for an alternate point of view.

But Harpoon is one of the most disappointing breweries of all time for me. Sorry to say that with the exception of Leviathan Imperial IPA, I think they suck so far for me.

Anyway, thanks for reading and commenting and Go Big Red!