First, the picture is with Sandra Bullock because she is devastatingly hot! Don't argue with me!

I watched the Oscars for the first time ever last night! Yes, really. I could never force this agony on myself under normal circumstances. But I had four 30-year-old chicks in my house that wouldn't be denied! Anyway, Ben Stiller as the Avatar character was hilarious, especially when he was speaking their language. But after 2.5 hours, not to mention the fact that we watched a few more hours of pre-show shit, I went to bed at 11pm, before they announced some major winners. Told my sister and her three friends, who somehow, somewhere learned every entertainment industry actor, director, and movie, not to bother letting me know who won because I really don't care. And I still don't know who won!

One friend was in a "pick 'em pool, weighted toward the important categories" Really? I mocked enough people for a month, my sister rolled her eyes at me enough for a year, so that was it. They started their vacation today, including from me.

Tonight I'm also drinking Kerberos Tripel brewed by Flying Dog Brewery in Frederick, Maryland. I just fished the bottle out of the recycling bin because I didn't write down all the nonsense that their bottles have to offer, and I which I know you expect. Disgusting beer juice on my hands! Anyway, this is a Belgian-style ale and the label addresses me as "god of the barstool". Kerberos is apparently a "three-headed hellhound", which you'll see below in my skillful photography! Vintage 09 the bottle also says.

Spicy black pepper and light fruit all rolled into one aroma! Interesting flavors is what popped into my head. Very petite light citrus flavors to start, mostly orange. Then some ultra-pure and smooth alcohol, like a shot of absolute vodka. Flavorless but you know the alcohol went down! So far, "delicate" is the word I'd use for this "hellhound"! After that alcohol shot evaporates off of your palate, you will taste some spicy and fruity back and forth--black pepper then pear, apple and banana. Repeat. You will defintely feel the warming action of the 8.5% alcohol as well. Not really what I expected, mainly because I didn't have expectations. I guess I'm saying this was pretty unique. Low to medium carbonation and body. You will finish with a bit of spice left on your palate. Check this guy out for sure! I don't think you can go wrong with this brewery! Except that these guys want to play the tough-guy-name beer game. And many of their beers are so subtly fine that they don't work out that way. I mean, Raging Bitch? Really? NO!

Two pictures for your viewing pleasure, because in case you haven't heard, cameras don't usually wrap themselves around beer bottles! 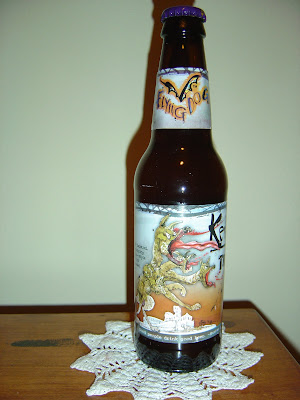 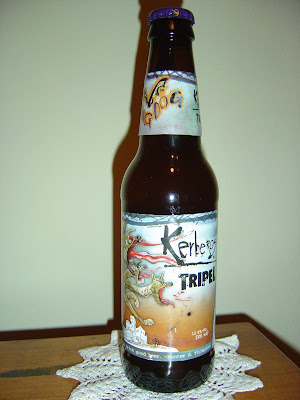 I just sweet-talked my local beer store manager into tracking me down some Raging Bitch! (They had it at a store across town but not at the one in my neighborhood.) I'm trying it out tonight! Weeeee....

You're gonna love that, Marie. I do! And I'm in the process of making it the next "Good Stuff Series" entrant.

You might see it around more again shortly as they just brewed another round, according to my local retailer.