Let me tell you about my day. First, I had a guy tell me he wasn't going to sign my contract but he was still going to attend my company's event. Further, he was going to pay me on his terms. When I told him he was going to sign or not be welcome, he reverted to a 4th grader and took his ball home to his mommy, crying "we'll just have to cancel this contract," which only existed in his mind. In preparation for round 2 on the phone with him, I got myself worked up and prepared and ready to threaten him with an executive-level call or two. I made the beautiful document to your left while I was in a meeting. Productive, huh? Round 2 went better than expected and we made some progress. I'll leave it at that!

I stopped by BFF Total Wine on the way home--sister and friends back from their cruise tomorrow morning and I need to be prepared. "Was that enough to turn your day around?" you ask. Yep! I got my beer and moseyed my way over to the wine tasting area. Hey now! There was a beer tasting instead being done by Rich Nowak, the Regional Brand Manager from one of my favorite breweries, The Brooklyn Brewery!

Rich was just getting things started and squared away anyway, so one of my newest bestest friends, Assistant Manager Brian, told me I needed to start with a beer he had left over from the beer tasting class he taught last night. It was a very mellow and flavorful shot, lightly bitter and very smooth. I thought maybe a little sour, too, but I didn't get that on my second shot. Why so little? This was a 1999 Sierra Nevada Bigfoot Barleywine and the last bottle was almost gone. Yes, 11 years old! I reviewed the 2010 version and 2009 version, but both were reviewed fresh and had their mega-bitter profile at the time, so the age certainly was a factor in smoothing out a big beer, and it was so generous of Brian to offer to share that with me! I love you, man!

But back to the Brooklyn beers. Rich had a nice brochure with a dozen or so beers listed on it. Nice presentation. He offered Brooklyn Lager, Brooklyn Local 1 and Brooklyn Local 2 (which I think this was my first time). Very knowledgeable, spoke in terms everyone can understand, helped describe the beer and peaked expectations. That's before he knew I wrote this crap for you guys! In the end I pointed at my two favorites in his brochure: Brooklyn Black Chocolate Stout, which will be my next wife, and Brooklyner-Schneider Hopfen-Weisse, a never-to-be-brewed-again awesome beer you should buy. There are TWO left in the Pembroke Pines store and then that's it! Then I introduced myself, took his card and got the hell out of there as I was late for child #2 pick-up! I did get my 38-year-old self carded on the way out, with 6 days of beard growth!

My oscillating day continued at home. I've been longing for my Wild Devil Ale brewed by Victory Brewing Company in Downingtown, Pennsylvania. All day! First, I struggled to get the cork out of my wine-sized bottle. When I did, huge pop! Poured it into my glass. Mega-head! Nope, epic fail here! This is not the beer this (love-of-my-life) brewery intended me to be drinking. It tasted like medical waste, with gigantonormous carbonation, silica-gel drying power, and horrible non-beer flavors. I dumped the whole thing after the first few sips, and as much as I was looking forward to drinking this beer, which is Hop Devil with a Belgian yeast, I was that much pissed off that I spent a pretty penny on this bottle. Fuck!

I wasn't sure whether to even do a review or not, but you people are so needy. So plan B is Southern Tier IPA brewed by Southern Tier Brewing Company in Lakewood, New York. Lemony aroma. Lemon and bitter flavors start this guy out, tons of citrus but very astringent and drying. Annoying already. Pine and alcohol add the (melted) icing to the cake. This beer is on the low end of IPA's and nothing like awesome grandpa Gemini which I had several days ago. I am a certified hop lover and this was just a mess! Get something else. This was a "C" beer at best!

Now, hopefully my night will swing back to the plus side! This post took me like 800 hours, so make sure next time you are buying anything on Amazon, start here! It helps me and doesn't matter for you. Amazon sells everything so click a link below to begin! Thank you!

This is your infected asshole bottle of Wild Devil Ale... 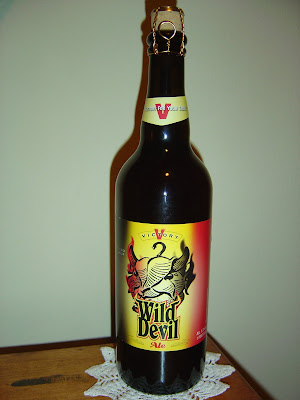 And this is your fairly shitty bottle of Southern Tier IPA! God help me! 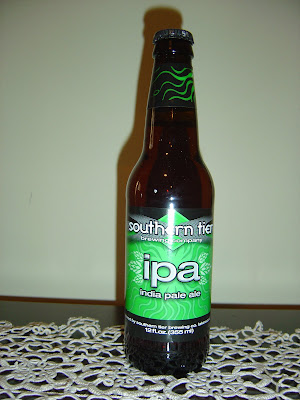 I'm in absolute shock! You dumped Wild Devil? I loved this when I was up in PA. I am just having a hard time thinking that you did that.

Mike. The bottle was clearly tainted in some way. This was Wild Devil with something wrong with it.

I feel bad for you, as the Wild Devil was one of my favorite beers that I had last year. Hopefully the bottle that I have waiting for me to drink isn't tainted as well.

Though disappointed, I know that beer was not what was intended.

Eventually I will get me another and give it a second shot.