March Madness started today. And the first three games were terrific, or at least the 30 second computer refreshes made them sound good, considering I was working. One upset and two other games that the favorites pulled out in one or two overtimes, including a #2 seed. I can't wait to actually watch a few games tonight. I'm sure I'll be lucky enough to catch the 18-point blowouts! Mark My Words! Cornell will beat Temple tomorrow afternoon!

Tart raspberry aroma. The aroma makes you think the beer will be pink, but nope. Tart raspberry flavors as well, like a wine cooler or a diluted Raspberry Stoli, what's left after the ice cubes melt. Really! Clean, crisp, refreshing, good carbonation. THE fruit beer for a non-beer appreciator. Was a good beer. BTW, the Stoli website had no trouble with my 2/31 birth date verification. LOL. If you see more websites like that, let me know. I'm gathering a list for a future post! 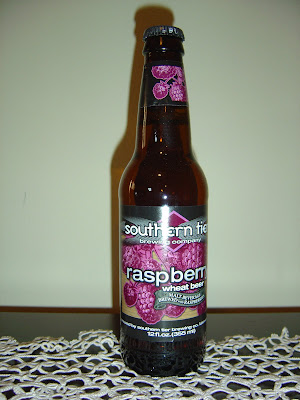 Raspberry huh? I'm usually not a fan of those flavory beers but I just might have to give that bad boy a try. (I do like Tier's unearthly and Hoppe.)ciest

Marie. You didn't "Mark My Words" then. The fruity ones I could do without, too, but I am open to anything for a try.

Here's a preview for tonight. I'm drinking Big Red from Southern Tier. Why, you ask? Because Cornell is the Big Red (Bears, sometimes)! Celebration.