This past weekend I found myself on the couch rocking out with Iron Maiden in their "Death on the Road" Tour. It was on The 101 Channel with DirecTV, which I was watching on Channel 239. Go figure! (For you weirdo readers, it's the same channel they show the prison-rape show Oz late nights.) Right now, I HATE DirecTV, so much so that I don't even want to talk about them to say why. Also, I was never a fan when Iron Maiden was more popular, and I couldn't even name one song, not even today. But for some reason I felt like watching this hour-long special.

Now these dudes are aging... a lot! My office-mate told me that they are and were super-popular in Brazil and that he still kicks himself for missing a concert in Rio in 1984. So you can guess their ages, ballpark. Anyway, I cranked the volume to the point where my wife and kids asked me to turn it down. But it was cool!

Tonight I'm drinking Trois Pistoles brewed by Unibroue in Chambly, Quebec, Canada. The label has a picture of three church-ish, school-like buildings. Above the buildings is an ominous sky with a large flying horse. Hmmm. Best before 09-02-12.

Yeasty aroma with plenty of lovely fruity scents. Very creamy fruity start, plenty of ripe apples and pears. Those fruits are mingling with a very nice caramel flavor, and I think they are gonna have a second date for sure. The yeast stands out for the entire experience. Tart and very juicy, too. Now, you've all heard me mention the carbonation manufacturing capabilities of Unibroue. But here it was medium, very fine and accentuated the flavors awesomely! Some spicy remnants on the back end show up, with maybe even some cinnamon. The 9% alcohol was basically a non-factor. Smooth, complex and wonderfully put together. This was a terrific beer that you should all try out!

Death on the Road -- Iron Maiden

The Number of the Beast -- Iron Maiden 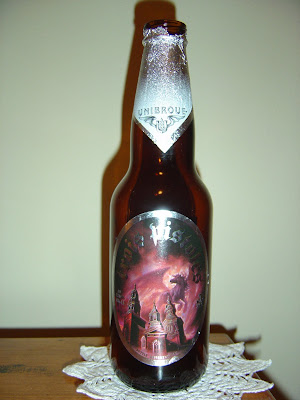