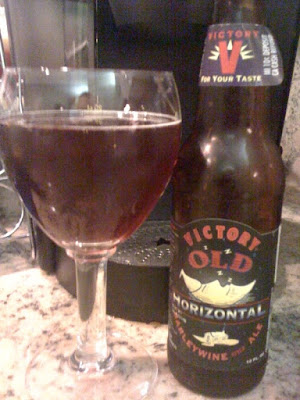 Today I have a South Florida treat for everyone. No, I'm not going to be telling you another story today. Wow, I never really knew how needy you all are! Instead, I have a guest reviewer. Brewkkake lives somewhere up near Boca, which for me may as well be Disney. Needless to say, we haven't actually ever met in person. We do, however, share a few common interests including great beer. There's word on the street that Brewkkake will be starting a beer blog soon so keep your eyes open for that as well. Until then...

After having child #2 with unemployed wife #1, I'm currently unable to splurge on so many new and exciting brews like my fellow beer-blogging colleagues and hardcore beer geeks. My fridge is full of bottles I've been sitting on for a while, so for this review I picked a beer that I could have postponed reviewing for almost half a decade, as indicated by the "Enjoy by Nov 6 2014" marking on the label. Also, I've been hesitant to crack open some of my Victory stuff because some of the ones I've already tasted have been a little...meh.

The bottle says I can enjoy it anytime between now and late 2014, and if I like it I may just buy a bottle to sit on (not literally) for a couple years and see how it matures, assuming the Mayans were poor mathematicians and we actually live to see 2014. It's seasonal, so it might be all gone already, but hopefully I can snag one.

The ale pours a deep caramel with reddish hues, almost like raspberry tea, forming virtually no head and a hair-thin lace around the rim. Upon first glance, you'd think it was like a previously-opened soda bottle on its last leg of carbonation.

Nose - You definitely get a little of the alcohol, but it's complemented nicely by strawberries, Twizzlers and sour laundry that was neglected to be placed in the dryer immediately after washing.

Mouth-feel & taste - Medium carbonation that fizzles like cheap champagne, surprising due to the lack of any foamy head whatsoever, but it feels nice and works well with the sweet berry, cherry and small hint of watermelon with a peppery alcohol finish. The fragrant hops are prevalent and seem to throw a few mild notes of floral candy at you. As I sit and analyze the aftertaste, the 11% alcohol makes its presence known, and starts to heat up a little before quickly fading into the background and your tongue cools off, as if this ale was brewed with a Jolly Rancher-flavored tube of Icy Hot in the mix. It's a pleasant sensation and I wish I'd tried this during the colder nights this past winter.

Overall, it's quite enjoyable and strangely refreshing for a barleywine-style ale with such a high ABV. I'd like to taste it up against Sierra Nevada's excellent Bigfoot barleywine to get a good comparison, and though I like this, something tells me I'll soon forget it. I'll definitely try to get another one or two bottles if possible, and I think this one was a solid B to B+.
Posted by Beer Drinker Rob at 1:38 PM

Infact I think maybe we should all three get together and film it....that would open up a whole new can of worms!

Well, you know where to look for alternate Brewkkake humor. You know this site is Rated G. LOL.

Yes, all of us should duel it out one night. A three-way. Doh!

oooooh. That is a beer after my own heart.

Yeah, Marie. I've had this beer before, too, but this was a guest review.

Let me ask you. Would you like to do one some time as well? You know how much I like your blog (when you're not talking about running).

that would be suh-weeet! In another couple of weeks we're doing another "beer geeking" night at my buddy Patrick's. Dogfish Head. That might be a fun one. Maybe we can swap blogs that week.