Was screwing around on the inane time-waster called Twitter last night. Let's see. Who did I meet there recently? Last night I met the President of the Earth, who said that he took on the title years ago, but that "[he's] only going to do it long enough to straighten shit out, then [he's] done". Fair enough. I hope he succeeds.


Around the same time, I met Adriana who seemed to be a normal beer-type friend. I think the talk was sports and beer when she said, "I am in a pool bar. Really fun. Come on over!" Having zero intentions of going even if this fun place was in Miramar, I found out she was tweeting from Brasilia. Hahahaahahahaha.


Not yet completely stimulated, I decided to engage some intellectuals. I am still waiting for a response from Michelle Malkin about my absolute favorite tweet from yesterday: @michellemalkin Skip O'Reilly next time and come on over for a beer. Bring Bernie Goldberg and we'll play scrabble!


Then I went to bed.

First thing this morning, I met Julie Durda, the extremely cute Channel 7 Weather Anchor. I don't get to watch the weather at noon, but I can stay in touch via Twitter if I want to know the scoop. I guess it was church-quiet this morning when she asked why, and I came to the rescue just in time. Just a simple exchange of hello's. I wonder if she has some anti-hurricane super power. Hmmm.

After all of that, I don't know anyone new. I made a list of Twitter people that I have actually met and the list is really very short. We'll see who is next. I do know that lots of people have made great friends because of this tool, which is why I keep hanging on. Oh, and to let some of you know when I write a new story about Twitter friends (with a beer review, of course).

Really grainy aroma with just a hint of orange citrus. Also a strange manufactured plastic smell. The flavors start out more orange-ish, like orange drink tart and tangy fake flavor. Too sweet, not pleasant at all. Herbal, grassy, grainy. Carbonation is medium plus and body is medium minus, both are fine, but I really don't like this very much. The orange is there and while it's clearly orange, it doesn't taste like orange. Do you understand? I thought so. And dudes, I live in Florida, and as much as I hate it here, I have me some orange perspective! I wouldn't if I were you. Sorry, I'd rather drink a Miller Lite. 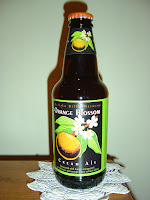 Tried some of it last night. I'll put this in sophisticated terms as I'm quite the beer snob. It was "ICKY!"

It tasted like tea made from perfumy, citrus popurri.

Anonymous. Yeah, this was a mostly shitty beer. Hands down, don't drink it!