So I started another blog a few weeks ago. It's about where I live: Miramar, Florida. Today I published an awesome posting. Apparently I live across the street from a former Nike missile defense base used to protect Florida from Cuba during and after the Cuban Missile Crisis. How cool is that!?!

So check out the new blog. It's not a daily and I probably wont curse as much, but there are still some interesting things going on here. Let me know if you're local, live here, work here, play here, considering moving here, whatever.

Tonight I'm going to formally review Coffee District Bourbon Porter Homebrew, first seen here during Beer Tasting Extravaganza Volume I. It's been sitting in my refrigerator for 6 weeks. I don't have any new information about this beer, just the original clip from before. Oh, and this time I also have a full bottle. Sorry there are no new pictures. Seems the wife took the camera. Here is the prior review: 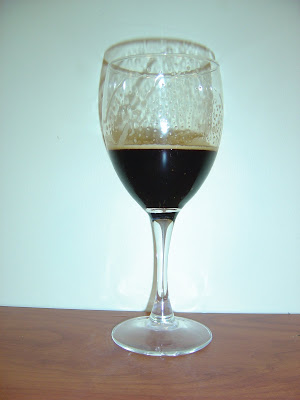 10. Coffee District Bourbon Stout (update, Porter) Homebrew. The owner of the Coffee District, Chung So, wasn't able to make it to our event, but he still sent a few bottles of his Bourbon Stout (I think they said stout). Update 2/22/2010: Chung asked that I mention the two brewers that brewed this beer, Kevin Abbot and Chris Black. Awesome job, guys! Also, you can see I was calling it a Stout, but Chung referred to it as Bourbon Porter. They used bourbon wood chips while brewing this. Smells? Yes, bourbon. The flavors have some chocolate, bourbon, alcohol, wood. There is a hint of vanilla, some dark fruits and I can't get that dark cherry out of my mind, so I'm gonna say the flavors are in this beer too. I brought home the "spare" bottle that was left over from this, so I'll give it a real review someday. A sipper, liked it a lot.

Bourbon and booze aroma, with very faint roasted and chocolate notes popping through. Flavors are much of the same. Very bourbony and alcoholic, although there are also some woody aspects. A hint of chocolate is there with a touch of vanilla. That cherry flavor I thought I imagined previously was not a dream and is a nice secondary flavor. Definitely a warming beer. Low carbonation. Too much bourbon flavor for me. I really do appreciate homebrewers, so thank you again guys for letting me drink your masterpiece!