This afternoon I'm drinking Espresso Oak Aged Yeti Imperial Stout brewed by Great Divide Brewing Company in Denver, Colorado. You all know (because you're dedicated readers, duh) how much I love their normal Yeti, and this one threw in two monkey wrenches to the mix--Oak and Espresso! So let's see. The oak comes from aging the beer on oak chips, and the espresso comes from Pablo's, which I guess is a coffee joint there in Denver. I love the line on the label, "It's official: You can now have Yeti with breakfast." And that is followed by Suggested Food Pairings, which include breakfast burrito, eggs Benedict and hash browns. My buddy BeerPancakes will be so relieved! In the end, I paired it with nothing, though I did just eat a Big Mac for lunch. Bottled March 5, 2010.

Before I even got the beer to a glass, the coffee aroma hit me. Holy Black Beer! I am not normally one to comment on the appearance of the pour and head and color, but in extraterrestrial situations I have made exceptions. This is the blackest of black can be black! The aroma is rich, with plenty of chocolate and coffee there, roasted and sweet.

The flavors start out with roasted and burnt (not in an annoying way like some others) creamy coffee. The fine bubbly carbonation is a great complement to that, though the carbonation is a bit lacking. Chocolate, vanilla and oak are also prominent players in this beer, not surprisingly. There is a little sweet and spicy combination, too. The 9.5% alcohol of big 22 was only barely noticeable, but it did chop up the body in the end (like Jeffrey Dahmer). Smooth with a pleasant aftertaste left behind. A really nice beer, although I must admit that Oak just isn't my gig. Check it out for sure! 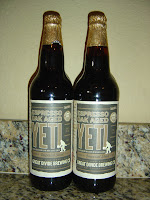 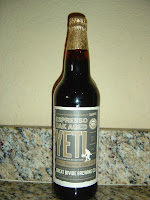 Here are two pictures for you. The other bottle is in a box right now, perhaps to see how aging it adds to its character. Or maybe just for the right situation. We'll see.
Posted by Beer Drinker Rob at 2:01 PM

Mmmm... we got to sample this at Beer Club in March and after all samples were given out, I went straight back to the Aged Yeti for more. I do love a heavy, flavorful stout.

Good morning. Yes, this was a pretty good beer. And as you can see, I have another for some other time.

I really want to try the Chocolate Yeti, but that hasn't come down here yet.

I've only had the regular Yeti but that sounds killer! I don't like when stouts are TOO sweet so I think I could really get on board with the espresso oak.

This one definitely wasn't too sweet. And it was thick and rich with nice flavors.