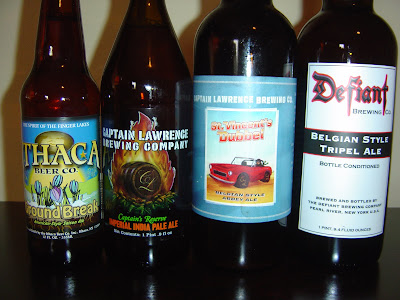 Nice day today, but I'm certainly glad the day and week are winding down. The day started when my coworker walked in after being in New York for a few days. Yes, that means he brought back some beers. See the picture above: Ithaca Ground Break, Captain Lawrence Imperial IPA, Captain Lawrence St. Vincent's Dubbel, and Defiant Tripel. Thank you, again, awesome coworker!

Coordinating to make a prospect list from 1200 miles away is never easy, but I will tell you that Ariel and Shane from Whole Foods Chelsea in Manhattan were instrumental, awesome and you know, put up with me which is never easy. Also awesome were Twitter friends @IDrunkThat who offered to buy and deliver beer to my friend to bring back and @BasicallyRed who offered alternate locations and support all along the way. If that's not the biggest #FFF reason to follow these two... Thank you, everyone!

Next great thing for today: I met one of the Corporate Honchos from Total Wine who was visiting (= spying on) their Pembroke Pines store today. I've been working at becoming CEO of Total Wine on FourSquare lately, and this just might be my way in the door. Anyway Twitter Greg was there and I actually got a $20 gift card just for saying hello! No Shit! Of course that is already a spent card, but I'm pretty sure that was the point. And let's just say the card didn't cover my purchase. 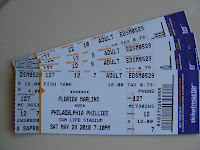 Finally, when I got home, yep, my Memorial Day Weekend Phillies-Marlins tickets were in the mailbox (mainly because I refuse to pay Ticketmaster $2.50 more than their outrageous fees just for the right to print them). Yep, going to see a game. Not sure who to go with since my wife has a friend coming in to town, not to mention the fact that she hates baseball. My kids last time didn't pay attention for one out and we did 45 bathroom breaks before leaving in the third inning. I guess what I'm trying to say is that I have tickets for sale. LOL! No, I'm not too old to use LOL. Also, I was reminded by this delivery that the Phils are scheduled to start a weekend smack down on the Marlins in just a little while! I hope I can find what they call "Sun Life Stadium" come May.

Tonight I'm drinking Ground Break, an American-Style Saison Ale brewed by Ithaca Beer Company in Ithaca, New York. Apparently these guys came into existence just in time for me to be gone from my four-year ordeal at Cornell in the early 1990's, so as much of my life as I've spent in Ithaca, this is my very first beer from this brewery! The label is nice and bright and depicts some spring flowers blooming through the almost-melted snow. "THE SPIRIT OF THE FINGER LAKES." Best before May, (I guess 2010).

Fruity aroma, lots of orange, some peaches and apples with just a spicy touch of cloves. Slightly more bitter to start than I was expecting with some lemony zest dominating. There are also some immediate yeast flavors. Earth and grass, too. That persistent orange and lemon rind gives a pretty strong bitter, but from out of nowhere it is kept in check by a sweeter honey essence. A bit spicy on the back side, especially as it warms up a little. Good medium carbonation, crisp, refreshing. The citrus bitterness lingers on your palate long after this guy's gone. Nice introduction to this brewery. I'm hoping to get some of their other beers, someday. Check it out if it's available near you!