If you pay attention to beer nerd stuff or are a major business news geek, you may have heard that Anchor Brewing was sold yesterday to Griffin Group. It seems the two major players in that group, Keith Greggor and Tony Foglio, already have experience in this industry, as they developed the Skyy Vodka brand.

Read the article. It's good and includes quotes from Fritz Maytag (the guy who sold Anchor) and Ken Grossman, founder of Sierra Nevada Brewing, as well as from the new owners. I suppose that their recent collaboration beer, Fritz and Ken's Imperial Stout (I have the bottle but didn't drink it yet), would have been a better beer to go with this posting, but I can't drink a wine bottle before my son's swimming class!

But tonight, in honor of the brewery, I am drinking Liberty Ale brewed by Anchor Brewing Company in San Francisco, California.  First brewed on April 18, 1975 to commemorate the 200th anniversary of Paul Revere's famous ride. Wow. So 235 years and a week or so! This beer has been a long-time favorite of mine. I did a review back in February, 2009, which you may as well skip as it didn't provide much of a review. Let's see if I can do better this time around. The bottle has a cool shape and depicts an anchor in front of an eagle.

Beautiful aroma--floral with fruity peach and orange. The flavors sport plenty of citrus along with some pine to start. Fruity, floral and hoppy, balanced on the lightly bitter side. Refreshing, crisp and clean. Creamy and smooth, yet the awesome carbonation is still a little prickly. Light alcohol on the back side with a dry finish. Excellent beer, forever!

The Art of Distilling Whiskey and Other Spirits: An Enthusiast's Guide to the Artisan Distilling of Potent Potables 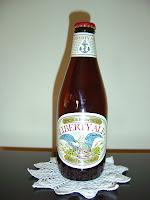 I loved this beer as well. I thought it had a very sweet candy or bubble gum flavor to it as well that made it stand out. I hope for all our sakes that this along with Anchor Porter don't get changed by the new owners.

It would be crazy for the new owners to mess with their flagship beers, but you never know.

This and a few other Anchor beers were some of my first beers outside of the mass produced ones.