I'm already an uncle for a few years now, but I got three text messages simultaneously this morning that almost made me double uncle. Two of the texts were from the middle of the night, so that means that AT&T decided for some reason that they'd protect me from a little beep in the middle of the night. Either they fucked up or have developed a Nanny State to set up curfews on my texts. I hope they aren't doing the same thing to my phone. Trust me, I know how to handle myself if someone texts or God forbid calls at the wrong hour without some serious news. Here's a reminder, if you needed it. But really, what if a relative died or something important (like the birth of a child) happened? Well, I guess I would have found out hours later!

Tonight I'm starting with Pangaea brewed by Dogfish Head Craft Brewery in Milton, Delaware. Pangaea is a flavored malt beverage brewed with crystallized ginger... and this one comes in a wine-sized bottle. This beer is named after the super continent that existed before it started to split a kajillion years ago. Serve cool not cold. Check. "Think globally. Drink globally." No problem. This beer ages with the best of 'em, and it's a good thing because after scouring the bottle for a date, I found a light yellow stamp BOTTLED IN: 2009-2. So this has indeed aged a year and 2 or so months. The label illustration also depicts the one continent of Pangea.

Spicy aroma, mostly ginger, generically fruity as well, and sweet. Lots of ginger flavors up front. They are very much mixed with candy and sugar flavors, very sweet. Fruity orange and pear flavors are also play a big part of the initial experience. Bubble gum, bubble gum in a dish, how many boozin' apricots do you wish to join you in the next phase of this beer. Yep, the measly 7% alcohol is a fruit and flavor antagonizer, not a total asshole, but a bully. Wait. More ginger, but you know what? It is starting to grow on me. I feel like I'm eating a meal that has plenty of ginger in it, not in a bad way, but there is no food here. Good carbonation, medium body, refreshing, smooth, complex, very interesting as usual with these guys. By the end I've had enough of the sweet candy-on-a-stick and ginger, too, but this was a pretty good beer. Try it no doubt! 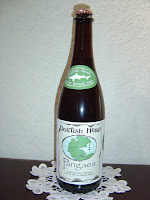 I just had one on draft tonight, myself. pretty tasty brew. nice and spicy, without being overpowering. pint was served way too cold, but it definitely got better as it warmed up. if the pricing on it was better I would probably have enjoyed it more for what it is.

I agree. Nice beer. Since I had a wine bottle, I'm guessing a pint would have been more appropriate. I also don't remember the price point since I've been (unintentionally) aging this "with the best of 'em"