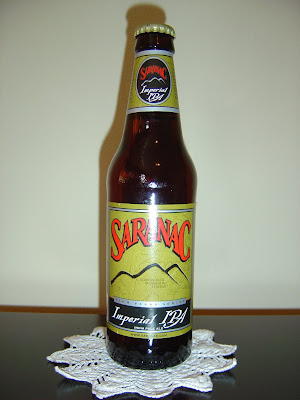 Over the past year and a half or so, I have only repeated beers a handful of times. Sometimes the recipe changed from year to year; sometimes I just wanted to do a re-evaluation; and sometimes because I loved the beer so much, I created a second entry in my Good Stuff Series you can find in the sidebar. But it's a little bit of a shame to not return to the good ones considering how many terrific beers I've gone through!

I do have a handful of beers at home that I've never had before, both 12's and 22's, maybe 15 or so, but I am not one of those "it must be a different beer for every review" guys. So last Friday I picked out 8 or 10 beers that I've reviewed before and remember them being great. All of them are IPA's or Pale Ales, at least this time around, and most I haven't tried since I first reviewed them. Let's see how opinions and experiences change, if at all.

Let's start with Saranac High Peaks Series Imperial IPA brewed by Matt Brewing Company in Utica, New York. My original review of this beer was last May while I was pondering the difference between slam dancing and moshing. The High Peaks Series, which this is the first of, was inspired by Mt. Marcy, Skylight and Algonquin, which are apparently high peaks in the Adirondack Mountains. This beer was made with ten malts and ten hops. The label is an Adirondack map--very bland for a series the brewery would like us to remember!

Fruity aroma with both soft, sweet pineapple and more intense orange citrus. Quite lovely! Nice sharp bitterness starts out the flavors, very peppery. There is, however, a large balancing caramel flavor that works really well. Oily and chewy in the mouth with good carbonation. The 8.5% alcohol also stands up as you progress. Definitely less fruity than I was expecting or desiring, and the spicy pepper and bitterness remains in force throughout. I don't mean to sound ungrateful there as I enjoy that bite as much as the next guy, just stating facts here. You will finish with a dry bitter alcohol aftertaste and a little bit of medicinal flavors. I do wish it was a little more refreshing, a little more fruity and slightly less peppery. But not a bad beer. I liked it!

I really need an imperial IPA right now!! I went to my local beer store and was forced to choose quickly under duress. I don't know even remember what I got! Think I'll be going back today and taking my time...

Definitely one of my favorite styles of beer. You could make your plan before you get there, but that might be too easy. There is nothing like browsing the beer section.