My miserable day included two hours at work with my non-working-computer that when it did finally work quadruple downloaded my 300 emails I had received since I left yesterday. Then I spent another two hours helping defend the company in an unemployment benefits dispute appeal hearing over the phone. At which point it was way past lunch time, so I unsatisfied my hunger with a Costco hot dog. But guess what? Those were the rosier moments of my day!

I picked up my three year old from school, only to notice he was wearing different shorts than he went to school in. Yep, he didn't make the toilet! This has been happening lately. He gets super distracted with whatever project or computer thing he's working on, then by the time he realizes he needs to go #2, a little gets in his underwear before he finishes the deed in the toilet. And as upsetting as it is to everyone, the teachers make a giant too much deal of the whole thing. He doesn't want to go to school anymore. That's his new tag line!

My wife called me this morning asking if I took money from her wallet. Since it wasn't me, blame fell on the seven year old. I confronted him the second I picked him up from school. Several blatant lies later, he confessed to taking $3 yesterday and saying he spent it on extra pizza in the after-school sale. I guess I believe that part but am not sure I have the complete truth yet. So the punishment began with a 200-word essay on why he shouldn't go into things that don't belong to him and moreso on why stealing is wrong, etc. My mom made me write an essay when I was his age on "Courtesy and Consideration" after I got one of those "needs improvement" checks on my report card. She has it somewhere.

But wait! It gets way better. There was then a knock at the front door. I thought I was going to have to tell another friend he couldn't come out to play today. Wrong! A neighbor family (mother, father, two girls) was standing there. They asked if I was seven year old's father and I told them yes. Apparently, they caught my son and another boy playing with matches and trying to start a fire yesterday evening. Fuck!!@!!@!! I yelled for him to come downstairs, to listen to their lecture, then mine, then he apologized over tears yet still saying the other boy was doing it more. Did I say FUCK!!!@#@@!?

When I was about his age, my brother and I got caught playing with matches (I could have sworn I shared that story before but couldn't find it). My father took us that night to see one of his severely burned patients in intensive care at the hospital where the patient's body did all the talking (well, she actually lectured us too). To make this even worse, I've had this matches/fire/burn victim serious discussion with this kid many times, including recently when his friend's house's garage around the corner got gutted by a fire just a few weeks ago. I even wrote about it in my other blog. Look at those pictures! Fuck!!!!!!!!!!!!!!!!!!!

One more thing about all this crap before we get to the beer. I told "matches incident family" to report any of my children's behavior they don't like or is questionable to me immediately. Parents need to step up and discipline this kind of crap. When I was 17 years old in court defending myself against a "passing in a no passing zone" traffic violation, it eventually got dismissed. During the hearing, the State Trooper mentioned that I had also been speeding although he declined to tack on that extra charge. On the way out, the Statey told my dad that if he'd known I was his kid, he'd have let it go. (Doctor Dad knew most of the Stateys, at least by name and face, because he'd met them in terrible emergency room accident or criminal situations). My dad told this dude that next time he stopped one of his kids, that the cop should give the maximum penalty for every offense! How about that for taking some responsibility? Parents today are so irresponsible!

Tonight I am drinking Sierra Nevada Torpedo Extra IPA brewed by Sierra Nevada Brewing Company in Chico, California.  This is the second time I reviewed this beer and was enamored with it the first time a little over a year ago. I've seen it in the grocery store, too, and had it a few times in between just as an everyday beer.

Nice citrus aroma. Big grapefruit bite up front. Lots of pine and sticky flavors complement the bitterness. Despite the big hops, you can taste the malts in the background. No one just dropped a lemon on your tongue or anything like that. There is also a spicy black pepper bite before you finish quite a bit drier, with a slight alcohol aftertaste. Clean, smooth, refreshing. Although I enjoyed this tremendously, I think I liked it better the few times I had it before! Could be my fucking mood though! Drink it if you like big bitter. 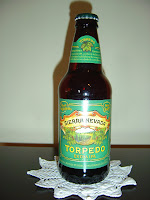 Breeding and brooding is quite interesting indeed. Thanks for the funny story and anything from SNB is wonderful. Good luck with the monkeys. Scott from Carefree Arizona

Wow. I am just re-reading that day I had, along with all the side story tangents I went off on. LOL. Glad to have left that day in April.

I really like this Torpedo beer and what's even more awesome is that they keep it at the same price as their awesome Pale Ale.