Happy Mother's Day, moms! We appreciate all you do for us, and yes, I speak for everyone!

After making my wife breakfast in bed, we went to our pool this morning. The gate was locked with a deadbolt and had police tape across it. Hmmm. I didn't hear about any crimes, so why was it closed? No explanation, and I was there just yesterday. Someone better have puked a major amount for them to close it on a Sunday holiday and 92-degree day.

I can't wait to call the property manager tomorrow. She is going to have a bad day, let me tell you. Apparently, according to one of my seven-year old neighborhood sources who must have heard something, the property manager needs to do something about the surface around the pool. I will grant that when they sealed the bricks with some oily chemical a few weeks back, they fucked it up. Every single kid and adult was slipping and sliding and falling. But to shut down the pool on Mother's Day? Fuck Them!!!! So we went to CB Smith Water Park instead, which also kicked some ass, but that trip cost me $40. My pool is included in my monthly maintenance charges. Assholes!

This afternoon I'm drinking 2009 Correction Ale brewed by Lagunitas Brewing Company in Petaluma, California. I found this over at Crown Liquors last week, was the last bottle of it. There is lots going on the Big 22 label. First, a "401k, 301k, 201k..." banner headlines the label. Then you'll see "We're All Bozos on this Bus" in big red lettering. I'm not sure, but it appears the label is actually quoting The Firesign Theater on that one. Next, "This is NOT a Double IPA. It's just a good American Ale". Finally, there is a really long story:

I think we're all Bozos on this bus...I mean, really- who would ever have given their money to a guy with a name like 'Made-Off'? If one day an oily guy named Soprano showed up at your door wearing a suit that said Countrywide offering free money; who would have taken it? Isn't 'free money' an oxymoron? If it was all too good to be true, it was.Wasn't the end in sight when 'Flip This House' went on television...? In the future 2009 will be in there with 1929, 1941, and 1968. OK, we ALL partied down and YES, we took some liberties with some of our female guests. But now it's the day after Mardi Gras when everyone kneels down and prays. Apparently, it really is possible to have too much fun. But it is far better to have partied and lost than never to have partied at all. Gracefully surrender the things of 2008. Smoke a fag, drink a beer, and buy toothpaste... in that order. Live to party again... Call us! 707 769 4495


Seriously, the bottle says all of that! The aroma is very nice: hoppy, fruity and malty all in one. The aroma by the end of the beer is very malty. There is a solid citrus bite up front, much more than I was expecting, with lots of grapefruit and orange. You will no doubt also find yourself with a substantial amount of pine flavors in your mouth, too. Big carbonation really accentuates the bitter, but this beer isn't all about hops. There's enough of a malty caramel in the background to make this enjoyable, though you wouldn't call this way-bitter-leaning beer balanced.

Talk about healing my thirsty, out-in-the-sun-all-day boo-boo, this beer was refreshing, clean, and crisp. The 6.33% alcohol was a little noticeable and drying toward the end, and I could taste a small Band-Aid flavor in the distance, but this was really nice. I'm pretty sure that this is a once-brewed beer, at least by this name, but we can hope Lagunitas will introduce it again. If not, this brewery has the market cornered on hoppy IPA's anyway! Ask if you need another recommendation, Stoopid! 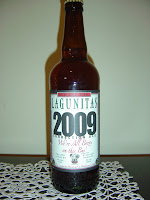