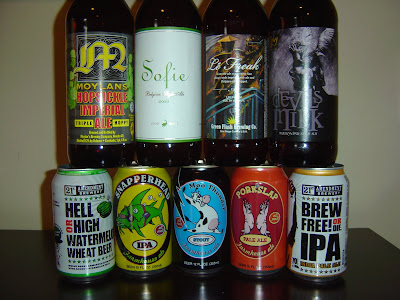 I received an awesome package from my friend Monday morning. He brought back nine beers for me from his recent business trip to Washington, DC. You see that includes four 22's and 5 cans, so a pretty big haul, considering it was a suitcase bring-back. It's taken me a few days, but here is how the trip and planning went down. Of course, without my friend, none of this happens, so biggest thankiest thanks ever!

This wasn't his first trip to DC, but last time was disorganized. Yet he still managed to bring home a Troegenator. BTW, even one new beer is awesome! Since I had success with both the local Whole Foods Stores in Chicago and New York City, that's where I started again. I wrote a detailed letter on their contact page and sent the closest store (which happened to be P Street, their largest locally) a Twitter message asking for help. It was clear there was business to be won! Nothing! Sent another Twitter message. Nothing!

Two days later I sent another message to their store's contact page. Here's an excerpt:

"If you want to have a contact page and be active on a social media site like Twitter, you need to interact with your guests. Thank you. I would like a list of options your store carries, whether it's a spreadsheet or thoughtful three sentences from this person to help me help my friend bring some beer back for me. There is business to be won, and I will write about my experience as well, so PR is at stake. Will you help me?"

I hate being a dick but, well, that got someone's attention. Their specialty beer buyer sent me this cool email.

I’m Randy the beer guy at PST.  Currently I have approximately 363 beers in stock.  I take it your friend is interested in some of the more obscure breweries rather than Miller or Pabst.  Given that assumption here are a few of the more interesting beers that I have:

[He proceeded to list 20 pretty awesome beers here; I could have definitely shopped there!]

Let me know if this helps at all….if you were looking for a specific beer let me know and I will see what I can do.

[This is where he left his cell phone number. Yeah, man, really!]

So that guy kicked ass, and I'm sure he hadn't seen my initial requests, but it was already too late! I had already thrown out another Twitter plea, and my BFF Greg at Total Wine told me to ask my other BFF Rob at Total Wine where to go, because he lives locally. He recommended Chevy Chase Wine and Spirits as an awesome, convenient, and safe-to-get-to alternative for my planning. I emailed CCWine and got a sort-of prompt reply that the hotel my friend was staying in was not in their delivery area. No problem. I made a list, and Larry there told me that he had all of those beers, conveniently let me pay him over the phone, boxed the stuff up for a simple pick up, and basically won my business. CCWine's email replies to a few requests left something to be desired, as it was not personalized at all, was curt, and gave zero more than the minimum, but after everything we went through, the beer hit went down fine.

Tonight I'm drinking the first from the group pictured above. I decided to start with Brew Free! Or Die. IPA brewed by 21ST Amendment Brewery in Cold Spring, Minnesota. Founders Nico Freccia and Shaun O’Sullivan have a little story on the back of the can where they mention "the obligation to have fun" and a slogan stating "The Right To Be Original". The can also brags 70 IBUs. This was definitely brewed in MN but there's a lot of talk about San Francisco as well where they have a brewpub. Someone fill me in?

Pine aroma, yet there is plenty of apple and orange too, yet there is still plenty of malty caramel, repeat! Flavors start out with sweet, malty caramel and pine everywhere. A big bread component comes next with a spicy black pepper nip at your mouth. There are no citrus flavors in sight. Syrupy and thick, under-carbonated. Flavors are decent but a dry finish combined with noticeable 7% alcohol and a medicinal aftertaste made the ending a bit of a turnoff. An average beer.

Oh My Dog: How to Choose, Train, Groom, Nurture, Feed, and Care for Your New Best Friend 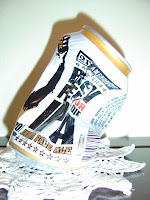 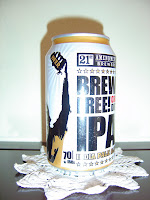 Before and After. No, dumbass, not like Wheel of Fortune. Full and Crushed!
Posted by Beer Drinker Rob at 8:44 PM