Has everyone noticed that there are tens of thousands of barrels of oil pouring into the Gulf of Mexico every day for over a month? No? You must be in some long-term video game tourney then! I forgive you. Anyway, BP is on like option 14 or some crazy number trying to stop the gusher. Nothing seems to be working, at least 100%.

I already drank the entire beer below, so I've decided to keep politics out of this. I mean, I am super-glad that President Obama had the foresight and strength to lead, as shown when he so charismatically said to "Plug the damn hole!" (Yes, even the Huffington Post)! It's wonderful to have pure genius around when we need it most!

On topic, yes, believe it or not, here are some of the absolute best pictures I have seen covering this disaster. The pictures are awesome, yet will make you cry (unless you are a nature-hating-motherfucker; and no, not for the dragonfly); they are so crystal clear and tell the story in pictures like I haven't seen even in words! I probably wont try to run that one asshole duck over tomorrow morning on the way to work! (Just kidding, PETA).

Tonight I'm drinking Devil's Milk brewed by DuClaw Brewing Company in Abingdon, Maryland.  I'm pretty sure I kicked some kid's ass in wrestling (that's scholastic wrestling, Ed Roberts) who was from there back in 1988, but that's the last time I've heard the name of this city. Really. Oh, the memories more than half of my life ago! LOL. I don't know, the label is pretty fucking scary. First the beer name; then the angel with his face buried in his hands in off-grays, blacks, and ominous purples; finally, a story, which ends with this phrase chicken-scratched into the label: "THE MILK MAN COMETH"! I'm not going to copy the whole story for you, but I took a picture. That might mean you can read it below. You'd know what I mean if you're a follower of my photographic skills!

The aroma is hoppy with plenty of pine, but there is just as much booze and spice to match that. Some subtle fruit as well. The flavors start out sweet, much moreso than expected, with tropical fruit nectar and a malty caramel. But then a rush of bitter hops and pine and spicy black pepper rip the sweet rug out from under you! Nevertheless, there is always a touch of sweet in this beer, from drop one to the end of big 22. A touch of light citrus comes in and out as well. The carbonation and 10.6% alcohol strongly interact as the beer progresses, a little angry and rough (perhaps Heaven and Hell?) in my mouth. Good body, thick and chewy, yet not syrupy one bit. The alcohol warms you up as well (is Satan in this beer?). There is a lasting bitter and pepper spiciness left on the palate. I don't have anything else to say except that the twists and turns of this beer would make one helluva South Park Episode! I liked it. Check it out if you can. If not for my friend who brought it back from DC, I'd not have had the chance. Thank you!

The Devil's Milk: A Social History of Rubber 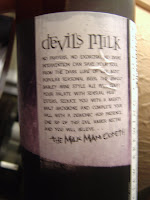 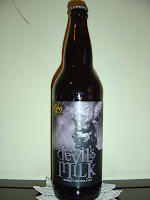 Here's the beer and the scary story. Click it and you can read it, but yes, it is blurry.
Posted by Beer Drinker Rob at 6:48 PM

Yeah, I usually save those words for special moments. I guess today they just seemed right.

No, it was just my way to protect wildlife!